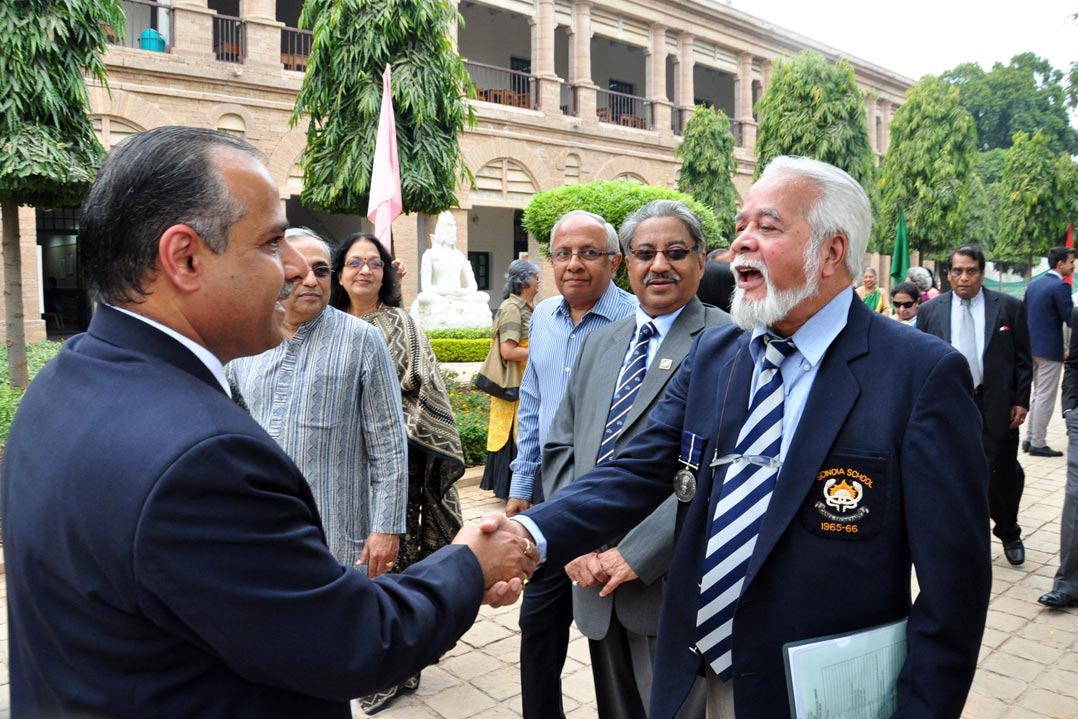 Old Boys from Batch of 1966 along with their families visited the school to celebrate their Golden Jubilee Reunion on 20th and 21st February 2016. On 20th February 2016 Principal, Dr Madhav Deo Saraswat, Bursar, Col Sanjiv Kaushal, Director Alumni Relationship, Mr GS Bakshi and all the Deans extended a warm welcome to Class of '66 and their families. It was a delight to watch the corridors lined up with notice boards which displayed activities in school. After having tea with faculty a special assembly was organized for the Old Boys, faculty and students. The Principal, Dr Madhav Deo Saraswat welcomed the Golden Jubilee Batch. Dr Saraswat urged the gathering to reassure themselves of their latent talent and not to follow the rat race. One should have humility at every stage of life as that is the basic principal of happiness. Then Senior School Prefect, Arindam Bahradwaj welcomed the Batch of 1966. Soon after Batch of 1966 was introduced to the august gathering by their representative, Mr Ranjit Salvi. Mr Salvi, ex Shivaji House, was the Head Boy of school and is the proud recipient of President’s medal. Mr Salvi spoke glowing about his batch mates who have excelled in all fields and are highly accomplished professionally. One of them is Dean of a business school, another one is the Chairman of Baidyanath and many are CAs who have reached the zenith in their respective careers. Mr Salvi motivated and inspired the boys when he said that the boys must learn to speak only when they have something to say not when they have to say something. They must focus on the task ahead. He encouraged them to think that money is just one of the tools to facilitate our lives. Then there was an interaction of old boys with students and faculty. The students asked relevant questions and listened attentively as the Batch of 1966 share experiences about their personal and professional achievements. Due to certain unavoidable reasons Vice President, Board of Governors, Mr Rajendra Pawar was not able to make it. However, Mr Pawar sent a video message to welcome the Batch of 1966. Then the Golden Jubilee Batch had a group photograph at Madhav Pavilion. At 5.35 PM there was a Special Astachal for everyone and the sobriety of the event could be felt everywhere. The best part was handing over the Golden Jubilee Reunion Baton to the representative of next year Golden Jubilee Batch by the representative of Batch of 1966. Mr Ranjit Salvi Class of 1966 handed over a baton to Shri Kamal Singh, Sudhir Garde and Mr Raj Kumar from the Batch of 1967. Today was the first time ever this ceremony has been incorporated as a part of golden jubilee celebration. And from this year onwards it will be a regular feature. It was indeed a very poignant moment. It was indeed noteworthy that the nostalgia which the Old Boys feel for an institution has remained unchanged for more than a 100 years. The mild drizzle made everyone feel as if heavenly blessings were showered upon the solemn occasion. A musical evening was organized for the Class of '66 on 20th February 2016. The aim was to cherish the musical talent among the Scindians. The noble art of music captivated everyone from Old Boys to present boys. So it was befitting to choose music as a medium to express love and respect for our beloved alumni. The entire program was full of melody, exuberance and excitement. The evening promised to be a rainbow of melodious compositions which mesmerized and enthralled one and all. It also created and revived many beautiful memories. To begin with the talented musicians gave an electrifying orchestra performance. The composition was in Raag Hansadhwani in Teentaal. It was a beautiful confluence of several musical instruments ranging from sitar, flute, violin, harmonium, tabla, bongo, congo, guitar and mandolin. After that divine performance the junior boys sang a group song which was based on Raag Bihaag and was composed in Teentaal. The audience appreciated the performance. Next to come on the stage were future tabla players, Ayush Parab and Abhinav Gautam who presented a tabla duet. The talented performers were highly appreciated by the audience and received loud applause. Then the flutists presented Raag Bhopali in Teentaal. After such an admirable performance Saideep Kukreja and Ishaan Agarwal presented an instrumental duet of Raag Yaman on sitar and violin accompanied by Harsh Vardhan Chandel on tabla. Their brilliant composition was flawless. After such an enthralling performance Sonam Bhutia sang `Ma Sharde’ which is a blend of cosmic tune, divine music and soulful lyrics. That was truly captivating. It was followed by a group song by some boys from Madhav House. The next performance was a medley of Nepali folk songs by Arbin Das and Nitesh Thakuri. That was indeed wonderful and proved that music has no language. Next Rhythm Kukreja, Pratham Dalmia and Harsh Vardhan More sang some famous English numbers. One scintillating performance and was followed by another foot tapping number which swept almost everyone off their feet. At this juncture Mr Ranjit Salvi recited a self-composed poem whereas Mr Dhirendra Chauhan and a lady sang melodiously. Finally the pride of our school, The School Brass Band presented a 20 minute Band Concert. The melodious evening was thoroughly enjoyed by everyone as it soothed the hearts and nourished their souls. The highlight was an incredible performance by Mr Ramesh Sharma on saxophone. The day ended on a nostalgic note and everyone departed from school for their respective places of stay with a hope to return the next day. Click here to see event photographs.