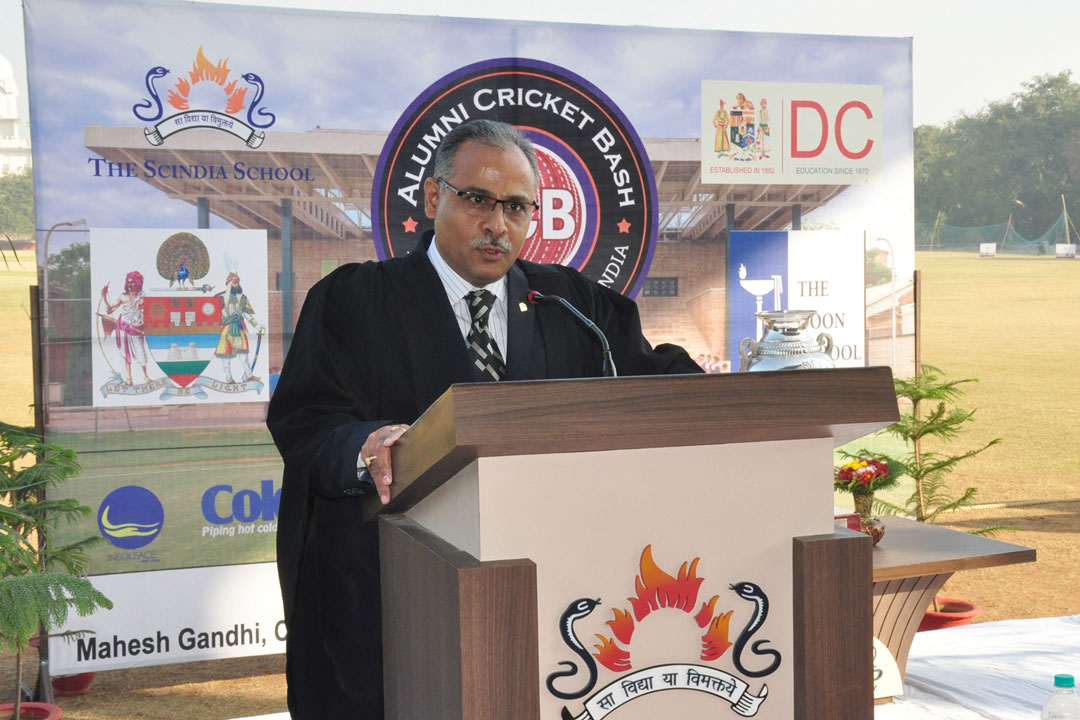 It was a very pleasant weather when alumni of four prestigious cricket schools; Doon School, The Scindia School, Mayo College and Daly College came to The Scindia School for Alumni Cricket Bash (ACB) on 17th December 2016 along with their families. The tournament will be from 16th to 18th December 2016.
The teams arrived on 16th December 2016 for net practice. There was a draw of lots in the presence of Principal, Dr. Madhav Deo Saraswat and all captains at Heritage Block on the same day.
On 17th December 2016 as they entered the portals of the school they were flanked by members of horse riding team and cheered loudly by junior house boys. The warm sunshine combined with a rapturous round of applause was perfect to welcome the cricketers.
The occasion began with the morning assembly prayers followed by welcome address by Principal, Dr Madhav Deo Saraswat. Dr Saraswat mentioned that despite representing four different schools they exhibited the same ethos. They were nurtured in such an environment where leadership, responsibility and service was given prominence. Principal, Dr Saraswat was extremely pleased and delighted to welcome the delegates. It was noticed that team spirit, sportsmanship, fair play and refined taste are natural ingredients of their personality. They will walk around with their head held high but full of warmth and humility because they refuse to compromise with quality. This tournament is a symbol of the same quality. Click here to see event photographs.
The Principal expressed his desire to welcome the teams again as they seek creative opportunity to come together and celebrate the same spirit which everyone has imbibed from their association with such prestigious schools. It was a moment of great pride and honour to host the tournament. Dr Saraswat motivated the present boys of school to take this as an opportunity to watch them play, have fun and observe their code of conduct.
Then Principal, Dr Saraswat unfurled the ACB Flag escorted by all the four captains. After the formal inauguration ceremony there was a Band Display. Soon a bunch of colourful balloons were released and the school brass band display was witnessed by the audience. The wonderful performance was led by Band Leader, Param Yadav. Among other tunes they played Maa Tujhe Salam and Chariots of Fire with aplomb. All the teams were introduced to Principal, Dr. Madhav Deo Saraswat on Madhav Field. Then the much awaited match began at Madhav Field and Oval Field. Click here to see footage of the matches held today.