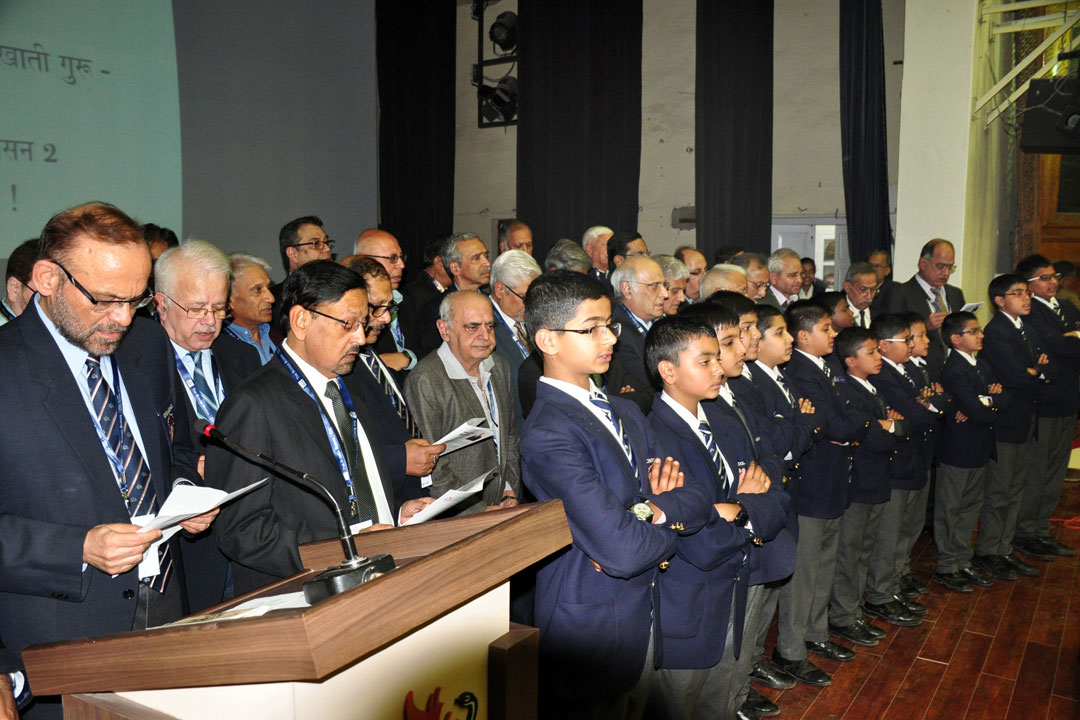 It was a much awaited morning as Old Boys from BATCH OF 1966-67 accompanied by their spouses reached the fort on 25th January 2017 and the journey of a memorable time began immediately. They came for Reunion of Golden Jubilee Batch of 1966-67. The proposed two day visit is on 25th and 26th January 2017.
On 25th January 2017 they were warmly received in front of School Assembly hall by Principal, Dr Madhav Deo Saraswat and proceeded to Assembly Hall. It was a very proud yet nostalgic moment to hear School Song being sung by Batch of 1967. It was followed by welcome address by the Principal, Dr Saraswat. Dr Saraswat emphasized that the sole difference between young and old was just a matter of age as the old boys assembled for their reunion after five decades.
Dr Saraswat welcomed them with a sense of pride and priviledge. He extended a very warm welcome especially to the spouses who made all the efforts to make the moment memorable on the campus. Dr Saraswat felt the alumni felt a need to come back as they forged a deep bond during school days which has been retained despite time and distance.
Then the ladies moved out for a guided tour of the fort escorted by some teachers. They enjoyed revisiting the fort after a span of decades and some of them could instantly remember and recall the good old days. The visit included Visit to Man Singh Palace and Sahastra Bahu Ka Mandir. After relishing a refreshing cup of tea at School Heritage Block they were back to school campus.
In the meantime it was a chance of a lifetime for students and teachers of the school to ask questions from the representative and alumni of 1967 in the assembly hall. It was a novel experience for the boys to watch with awe the presentation in which each and every Old Boy of the Batch of 1967 was introduced with audio and visual clips. ISC Batch introduction was followed by HSC Batch.
In keeping with the culture of the school they attended a special Astachal in their honour wherein SSP, Mriganka Ghosh welcomed the Old Boys then Mandeep Gurjar sang त्वमेव माता च पिता त्वमेव. Shubham Agarwal read out a short story on a pencil. Prateek Parihar read out तू युद्ध कर by Abhishek Mishr. To sum up the sober moment the choir boys sang a devotional song. At the end as customary silence was maintained for a few minutes.
It was followed by a musical evening which was dedicated to Batch of 1967 and the cultural evening was presented by the Old Boys. The entire evening was thoroughly enjoyed by the august gathering.
At the beginning the school orchestra gave a melodious performance. Then Mr Nandalal Rane, School Captain and representative of the Batch Of 1967 sang as he played a tune on a guitar. It was followed by Mr Dinesh who sang two melodious songs.
Air Aommodore Kamal Singh played a wonderfully enchanting tune on a mouth organ. The foot tapping numbers sung by Mr Nitin Mukesh was loudly cheers by the audience. At the end a vote of thanks was given by Senior School Prefect, Mriganka Ghosh. Then all the Old Boys proceeded to Principal’s dinner for dinner. click here to see photo album of the day.