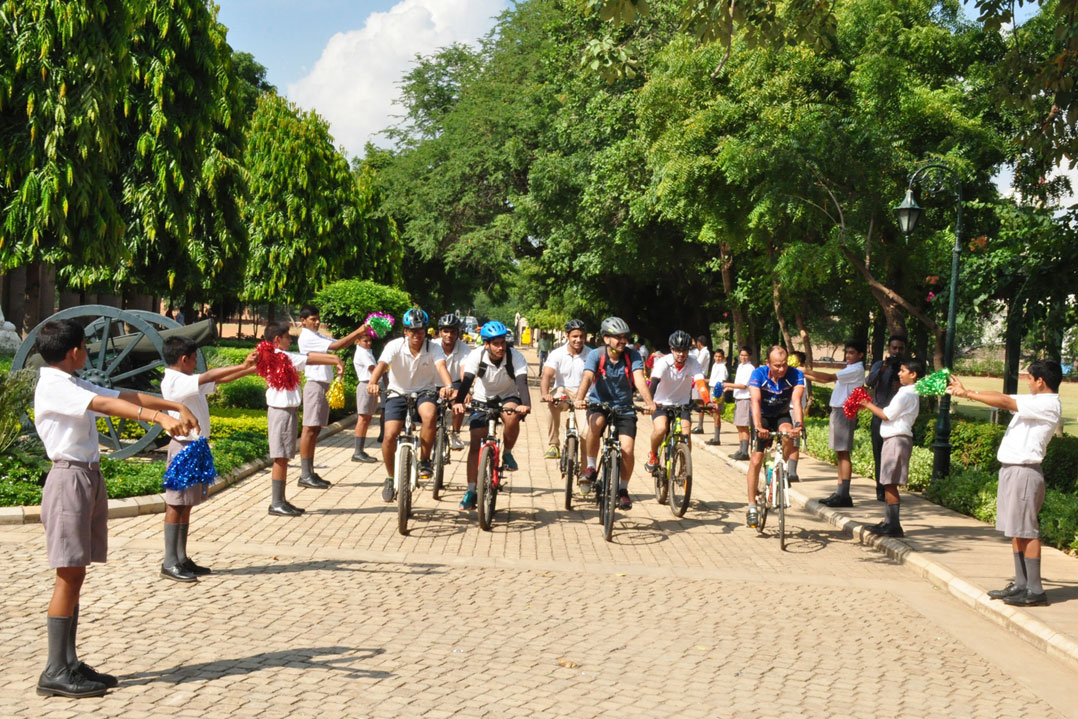 Mr Gagan Khosla (Ex-Jeevaji- 1974) is on Cycling Expedition from Leh to Kanya Kumari via Gwalior and arrived at the school on 2nd October 2016. Mr. Gagan Khosla was received at Urwai Gate by the school cycling team in the afternoon. The team comprised of Mr Anil Pathania, Mr Dheeraj Malik, Ayush Shukla, Urdesh Thakur, Shashwat Puri and Sambhav Mittal. It was a great moment to watch Mr Gagan cycle through the school main gate in the sweltering heat. The little Scindians cheered, clapped and waved in the main school building to cheer for Mr Gagan Khosla.
Upon his arrival Mr Gagan was garlanded by the Principal, Dr Madhav Deo Saraswat, Burasar, Col Sanjiv Kaushal and Mr G S Bakshi and welcomed by the students and staff.
The band boys played some memorable tunes such as 20th Century Fanfare, Chariots of Fire, Somewhere My Love, Takat Watan Ki Hum Se Hai and Final Countdown as a mark of respect for such a daring cycling expedition. Pranav Jhanjhi felicitated Mr Gagan by giving him a bouquet.
Mr Gagan is a missionary of adventure with great zeal and determination at the age of 61. In his welcome address Principal, Dr Madhav Deo Saraswat welcomed the entire contingent and felt that the family’s unflinching support helped Mr Gagan to implement the attributes he learnt at school. The grit, determination, emotional and physical strength of Mr Gagan is noteworthy as he cycled 4,200 kms. The thundering claps and cheer filled the air.
Dr Saraswat articulated that even after a span of four decades Mr Gagan has dedicated all his endeavours to school. He is indeed a `Game changer’ to the core, who created such a situation where contradictory statements such as pride and gratitude become synonyms.
In his address Mr Gagan was overwhelmed and profusely thanked the Principal, Dr Madhav Deo Saraswat and the entire Scindian fraternity for the warm reception. Mr Gagan recalled fondly the lessons he learnt on the field including all the joyful activities of adventure. Mr Gagan’s initiative on a cycling expedition from Leh to Kanya Kumari is solely to spread awareness regarding sports apart from making the people be conscious of their health especially after middle age.
Mr Gagan expressed his heartfelt gratitude to the undaunted support system of his batch mates from 1974 Batch, SOBA and his family members. At the end Mr Gagan inspired the boys to always contribute to school in every possible way and ensure that the school becomes better than before. Mr Gagan feel it was worth taking the much needed break at Gwalior and rekindle the long association with the school as an eminent old boy.
At the end some pertinent questions were asked by the Reivew team and press. Then the entire Madhav Field reverberated with the sound of S C I N D I A. Mr Devendra Bhatnagar, an eminent Old Boy, motivated the boys to say; `Grit, Guts, Glory! Go Gagan Go’!
Mr Gagan is a big inspiration for the Scindians who look up to him with awe ad reverence. Mr Gagan has a long way to go and the entire Scindian fraternity wished him good luck and a comfortable journey ahead.