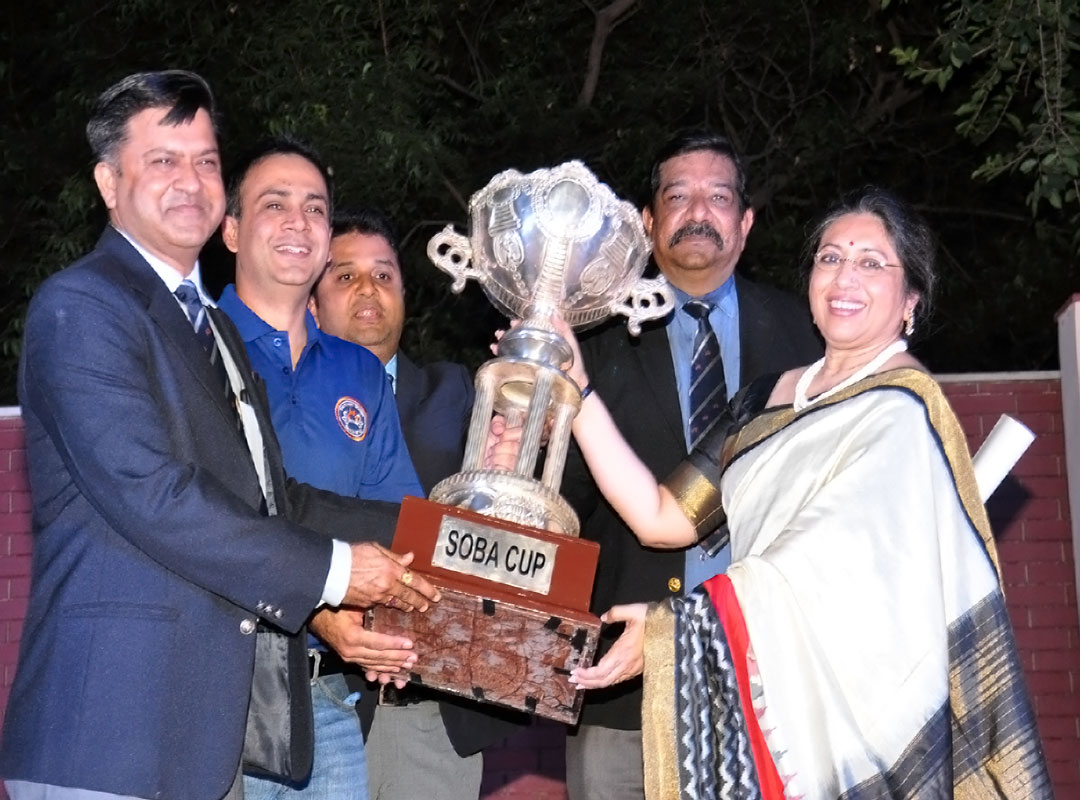 58th Old Boys' Day was celebrated on 16th October 2017. Principal, Dr Madhav Deo Saraswat and the entire Scindian fraternity along with office bearers and members of regional SOBA came together and joined the Silver Jubilee celebration of Class of 1992 and completion of ten years of the Batch of 2007 to celebrate their glorious years spent in school. There was an exciting Football match between Old Boys VS Present boys in the morning. It was a treat to watch the boys play with a great deal of enthusiasm. Each visit of the Old Boys is incomplete till they visit their respective houses and they were reminiscent of their good old days. SOBA Annual General Body Meeting was also held to discuss pertinent matters. Mr Anurag Dikshit is the new SOBA Secretary.
Click here to see image gallery. In the evening an entertainment programme was organized at SMOAT by the Old Boys. Mrs Tanusree Shankar (wife of Late Scn. Anand Shankar, Ex. JA, Class of 1960 and Madhav Awardee) was the Chief Guest on this occasion. The event began with the SOBA Annual Report for 2016-17 by Vice President Mr Baijul Badil who also anchored the formal part of the evening.
The highlight of the evening was the presentation of SOBA Award to Mr Mahesh Vadilal Gandhi and SOBA Cup to Varanasi Chapter. Mrs Tanusree Shankar was extremely grateful and delighted to visit the school after 25 years. She felt nostalgic to stand on the stage and recalled that special moment when her husband received the Madhav Award. She could feel the bond which the Scindians have amongst themselves as she narrated some personal anecdotes.
Mrs Tanushree gave the SOBA award to Mr Mahesh Vdilal Gandhi, Trustee, Scindia Education Society and Member, Board of Governors, The Scindia School. Mr Gandhi was extremely humble as he expressed a deep sense of joy when he was rewarded by his colleagues with the coveted annual SOBA Award. Mr Gandhi received it on behalf of all the Scindians and dedicated it to all the Scindians. His association with Scindia has been there for 6 decades. Mr Gandhi felt that each Scindian has contributed to the school in some form or the other. Mr Gandhi organized the release of the postal stamp for the school in 1997, the centenary year. Mumbai marathon and ACB Cricket was possible with his support. Then tiger hearted Karan Nanda from the Batch of 1992 addressed the gathering. He motivated the boys to be strong and not be defeated by hardships. He urged the boys to make the best out of the current situation. He reiterated that real education lies in giving the best one has and not worry about anyone’s opinion.
Class of 1992 donated Rs 1.5 lakh to Central SOBA. At the end Symphony band from Russia was the star attraction of the evening as they played melodious tunes and everyone grooved to the foot tapping Bollywood numbers. It was followed by Principal’s Dinner. In all a joyous Founders Day Celebration was experienced at The Scindia School by the august gathering. The Scindia School culminated its three days long celebration of the Founder's Day on 16th October 2017 with the hope to carry forward the legacy with aplomb.
After Diwali break the students escorted by teachers will leave for various Educational Camps on 23 rd October 2017. Junior House will go to Chamba in Uttakhand. Class VIII will go to Salli and Triund in Himachal Pradesh. Class IX will go for Labour Camp, Class XI will go to Bagwan in Garhwal region for Rafting and selected students from Class XI will go for cycling expedition from Jhansi to Nagpur covering a formidable distance of 700 kms.