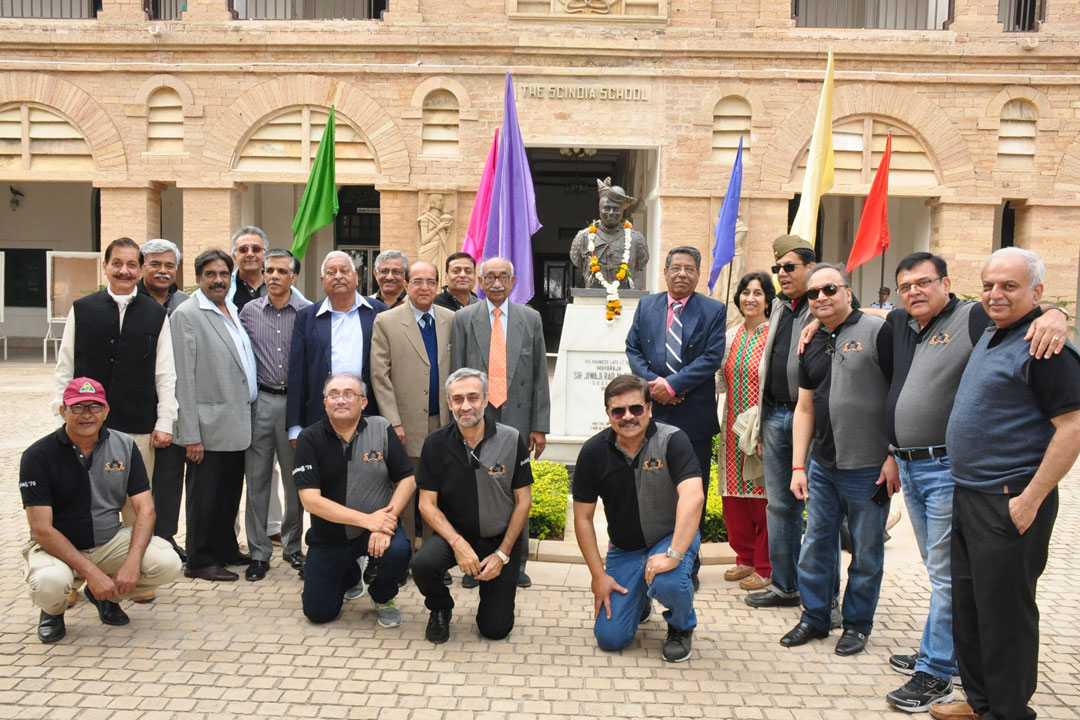 Old Boys from the Batch of 1976 visited The Scindia School on 4th and 5th February 2017 commemorating 40 years of passing out. Click here to see photo album of the event.
On 4th February 2017 the entire community extended a warm welcome when they met Old Boys from the Batch of 1976. Upon arrival they were warmly received in front of the School Assembly hall by Principal, Dr Madhav Deo Saraswat and the Brass band displayed their skill.
They visited various departments and went on a round of the school building followed by a visit to the school clothing store. The Old Boys delved into nostalgia as they visited their favourite hideouts and relived the moment. The school was delighted to meet some former teachers along with their spouses during the visit. They were Mr UC Bhardwaj (English teacher and Housemaster Jayaji House) and Mrs and Mr RS GARG ( Physics teacher, Housemaster Daluat House and Vice-Principal).
During Astachal Mr P M Khar’s daughter, Ms Kaumudi Aga addressed the audience and gave a brilliant insight into the true meaning of being a Scindian. After Astachal they moved to the Assembly Hall. They were welcomed by Principal, Dr Madhav Deo Saraswat. Dr Saraswat felt privileged and honoured to felicitate Mr Bharadwaj and Mr Garg along with Old Boys. Dr Saraswat said that these stalwarts are an epitome of a true public school teacher who sacrificed their personal lives for the sake of the school. They revived and relived those good old days during their stay, which they still cherish in their hearts. Such exemplary teachers created an environment which was more than a family as they accepted each student as an individual and nurtured him to grow with his inherent qualities. Dr Saraswat expressed his heartfelt thanks to the Class of 1976 as their perseverance brought such dignified teachers to the Fort.
Mr Bharadwaj and Mr Garg were extremely overwhelmed and thanked the Class of ’76 and the entire school. They prayed for the students, their parents and the school at large which has forged an inexplicable bond between the old boys and the present boys.
Mr Bharadwaj said that nothing is more important than health in life. Both the teachers and Old Boys from Class of 1976 were deeply touched and honoured by the respect that was conferred upon them by the school. The dedication and loyalty was still intact.
The Old Boys got a wonderful opportunity to share their time, perspective on life and unique knowledge on a wide variety of topics. The present boys and staff felt glad to know about their personal and professional achievements. Mr Somitra Sen, representative of the batch was deeply emotional in expressing his gratitude to the school. After his address the evening ended with an interaction of Batch with present boys and faculty. The present boys were motivated by the Old Boys to remember that persistence and hard work is the only key to success. Then they departed for their respective place of stay.
The representative of the Batch of 1976 felt elated to come together in such a huge way. The Batch of 1976 thanked the Principal profusely and got a standing ovation from teachers and students. Their words of inspiration, the richness of their experience will definitely help the present boys to carry forward the rich legacy with aplomb. The school is eternally indebted to them for their dedicated service. It was a pleasant morning on 5th February 2017 when the Batch of 1976 assembled in front of the Shivaji House and went on a round of the newly renovated Shivaji House. Then there was a meeting with the Principal and Director of Alumni Relation, Mr G S Bakshi in the Assembly Hall where they were briefed about the latest development in the school.
On 5th February 2017 they toured their respective houses escorted by XI Class boy of their respective Houses. It ended with a visit to the Heritage Block for tea followed by a visit to SOBA House. The assembly in Art Room was extremely fruitful as they interacted with School Review team and there was registration of Class of 1976. Such significant occasions mark the success of such reunion as it bonds the Old Boys who have been away from each other over a period of time. It was followed by a group photograph at Madhav Cricket Pavilion.
They enjoyed the tour of the fort and visit to Jai Vilas Palace Museum in town was optional depending upon their free time. The memorable visit ended with Light and Sound Show on the fort. The event was successfully coordinated by Mr G S Bakshi, Director Alumni Relationship.