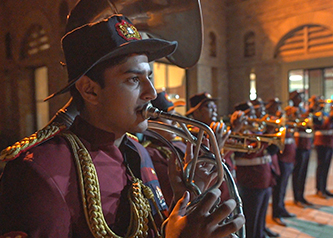 The Scindia School Brass Band in full performance mode is a sight guaranteed to provide goose bumps. The band consists of more than 200 students from class VI to class XII. Saxophone, clarinet, trumpet, euphonium, side-drum, base-drum, cymbals and trombone are a few instruments in the band. There are more than 50 tunes which are played by the band boys. The variety of tunes ranges from stirring songs like ‘Kadam Kadam Badhaye Ja’ to rock songs like ‘Wavin’ Flag’. The Band is the pride of the School and one of the finest in the country. It has won national accolades and been a part of the grand Republic Day Parade since 2005. The contingent representing the School at the Republic Day parade consists of 45 members, and all the members are enrolled in the NCC. Out of the 45 students, 4 are drummers, twelve make up the clarinet & saxophone section, 20 play the trumpets, and 8 students together constitute the Bass section. The senior with the most experience leads the band. An invitation for participation is sent by the MP NCC Directorate. The selected boys undergo a month’s meticulous practice session before performing for the prestigious Republic Day Parade held at Rajpath, New Delhi every year. They also give a guard of honour to many dignitaries and take part in the PM's rally. The delegates are invited for tea to the Air House, Army House, Navy House, PM’s tea and also to the Rashtrapati Bhavan. The participants are presented with a national certificate and an NCC B-certificate. The Band Major and Band Leaders are conferred the rank of Under Officer which is the second highest rank in NCC.
INCHARGE 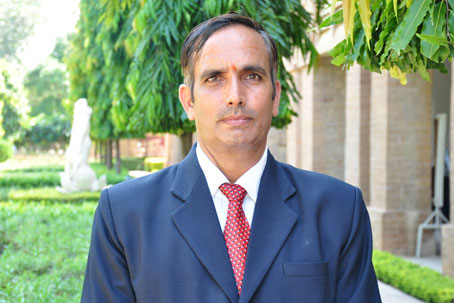