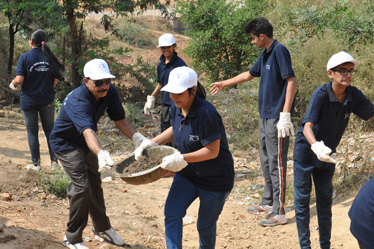 The Scindia Social Service League was founded in the early 1950s by Mr J.N. Dar, Mr Khanolkar, Mr Agnihotri, Mr Radhasharan, Mr Niyogi and the then Principal Mr K.C. Shukla. The objective was that the students experience the lives of the needy, empathise with them, and later in life contribute to the service of society. One of the remarkable feats of the SSL is the adoption of Sonsa and Nathon Ka Pura villages, which includes their development in agriculture, education, infrastructure, etc. Various camps such as the blood donation camps, programmes for the differently abled, eye donation camps which gave the power of vision to more than 400 people, have been conducted. Computer awareness programmes in various schools for the differently abled have also been held. A vasectomy camp for the villagers of Sonsa organized by the school was another great success. Presently the school is working to generate employment opportunities for the villagers of Nathon ka Pura. The ladies are being taught the craft of Tie and Dye. Gender equality is also being promoted through talks and thought provoking nukkad nataks, and it is heartening to see a change in the attitude of the menfolk. The Social Service League conducts four big events every year. These are lunch for shramjeevis and elders from Sonsa on Gandhi Jayanti, Sports events for the children of shramjeevis and students of Government school on Children’s Day, sports for shramjeevis on Republic Day and Sonsa Day in the 2nd week of February.