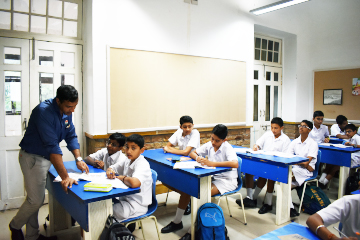 French and German are taught under the aegis of The Department of Foreign languages. Through academic and cultural experiences students are made proficient in the languages they opt for. The subject is open for students from Classes VI-XII.

We have a very active German language society Schiller Gesselschaft which offers the students a platform for expressing their language skill. The students take out a very rich Bi annual Magazine 'Zeitgeist' and present musical evenings and plays in German.

The French Society called “ La Société Francophone”  comprises of more than 130 students From Class VI to XII. The Francophones come out with their Annual Publication in the Form of the French Magazine called ‘L’Aube’. It is entirely the creation of the French Department students and the staff.  Various competitions in the form of spell Bee, Poster making, French Conjugation competition keep taking place to keep children engrossed and motivated in the language.“ Vive l’esprit d’apprendre le français”!!!

French Department organises educational trip to France during summer Vacations wherein the students get a chance to learn and polish their language skills as well as get a first-hand information about the French culture and civilisation, their food, fashion, perfumes, vines and cheese. They visit places of tourist interest and enjoy homestays to know about “ l’art de vivre”   of French people.