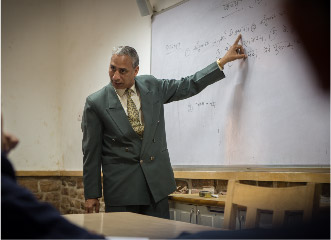 The Department of Hindi and Sanskrit comprises a team of six teachers who constantly work to develop and re- energise the learning of Hindi and Sanskrit through various classroom tested and ‘outside the classroom ‘ activities that not only teach the language in a learner centred manner but also lead to a systematic development in the use of the language. A number of activities like role plays, creative writing, language games, debates and group discussions are conducted for enhancing the language skills and imagination. In addition to these, streamlined efforts are taken up outside the classroom to stimulate the engagement of the students. The annual Hindi Magazine ‘Uplabdhi’ gives them a platform to express their thoughts. Our students are exposed to rich literature of the two languages. They are trained to use the skills of listening, speaking, reading and writing, in a variety of contexts and are able to adapt language to suit different tasks, audience, and purpose. They are imparted with the critical ability to analyse and evaluate diverse texts and are equipped with the language to question ideas and articulate their point of view. Proper technique of recitation of Sanskrit Shlokas, carefully chosen with a secular message, is taught to the students. The Department runs the Hindi Literary Society which conducts various public speaking and creative writing activities in the course of the year. Dramatics also forms an important component of the same. The students are also prepared for Inter School events.

The Department takes out “UPALABDHI” THE ANNUAL HINDI MAGAZINE. The aim is to inculcate interest of the students in the Hindi language through various creative activities conducted outside the classroom, Uplabdhi ,the Annual Hindi magazine is a medium through which students improve their different  writing skills, It gives space to express their feelings, observations, thoughts, dreams It gives them self-confidence which human being needs most for their development. It get published after the second academic term of the school ends. It is looked after by one teacher In –Charge and six to ten student editors.

KaviSammelans and Shloka recitations were organized to expose the students to the best of literature.

The School team won the Radio Play at the Welhams Literary Fest.

Hindi week was observed. It involved talks on the importance of Hindi language, creative writing competitions and poetry recitation.