Student Life > Academics > Departments > IT
IT 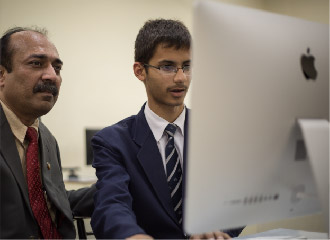 The Scindia School was the pioneer in leveraging IT, way back in 1980. The review by the Management in 2001 revealed that The Scindia School needed to effectively leverage IT to transform the traditional school functions. The vision for ICT@Scindia includes creating the best IT integration school wherein the teachers will:

Use technology to build instruction materials And the students will:

The ICT facility has grown exponentially in a little over a decade. School has a state of the art data centre. All class rooms are enabled with ICT resources. There are 6 computer labs with 30 desktops each for students, a faculty resource centre with 25 systems and all necessary support equipment for teachers. A dedicated team of 5 NIIT staff is always present for the staff in FRC. The School has faculty license of Microsoft, campus license from Adobe. The School provides laptops to teachers who have spent one or more year in the school.
Apart from subjects like Foundation of Information Technology for class VIII – X, Computer Science with Python and Multimedia & Web technology for standard XI-XII of CBSE curriculum a parallel courseware developed with the help of NIIT is being taught to students.
The basic objectives of IT education are as follows: With Adobe Photoshop students are able to learn to create high quality banners, pages, backgrounds, and buttons. In addition considerations of compromising high quality for file size are also explained. This would necessarily include conversion of one format to another. Students should be able to do colour augmentation and correction to dramatic collages. Using Adobe Premier a student will be able to edit videos, mix audio, implement a story board, Apply Digital Effects on videos, Get to use various compression techniques and learn blue screen effects and video capturing tools. We make them learn to develop fast loading web animations with high resolution images. Enabling simple action scripts into animations using Flash. Event based flash scripting and Components are also taught. We help them learn programming with C, basic concepts of a structural programming, the basic syntax (if, else, for, do-while etc.) of the programming language. Structures, Functions, Data structures and pointers shall also be covered in detail. They also learn how to create interactive website using HTML, ASP, Java-scripts and SQL database.
Due to the readily available computers, combined with the assistance of the School staff and the NIIT faculty, each student is quite a computer whiz.