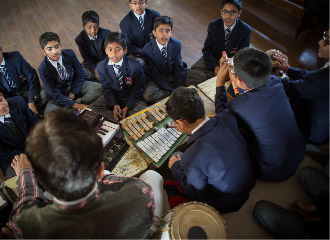 The Music Department at The Scindia School believes in music being a universal language. Training in performance and appreciation of music prepares a student in many ways to make his school experience a joyful and productive one. Students are trained in vocal as well as instrumental music. A students’ initiation into music takes place when the new students join the school. The learners perfect the basics of music and then gradually start with composition, performance, theory, history, exploring the Ragas and experimenting on their own. Within a short time, many students are able to play or sing a whole composition perfectly. The Department also trains students for a number of other activities such as – Inter School/IPSC Competitions and Inter House events, festivals (Ganesh Chaturthi, Basant Panchami, Janmashthami, Holi and many more), Independence Day, Republic Day and Martyrs’ Day. Swarn Utsav and Suman Behal Music Competitions are organised by the Music Department and both are named after alumni of the school. On Founder’s Day the School presents a fifty hand Orchestra. The students involve themselves in a host of the other activities ranging from giving background score for the Annual Plays and performing at Astachal. Individual attention is given to each learner. Our musical vocabulary includes tabla, sitar, flute and many more. We make fusion with Brass and Rock Band instruments.