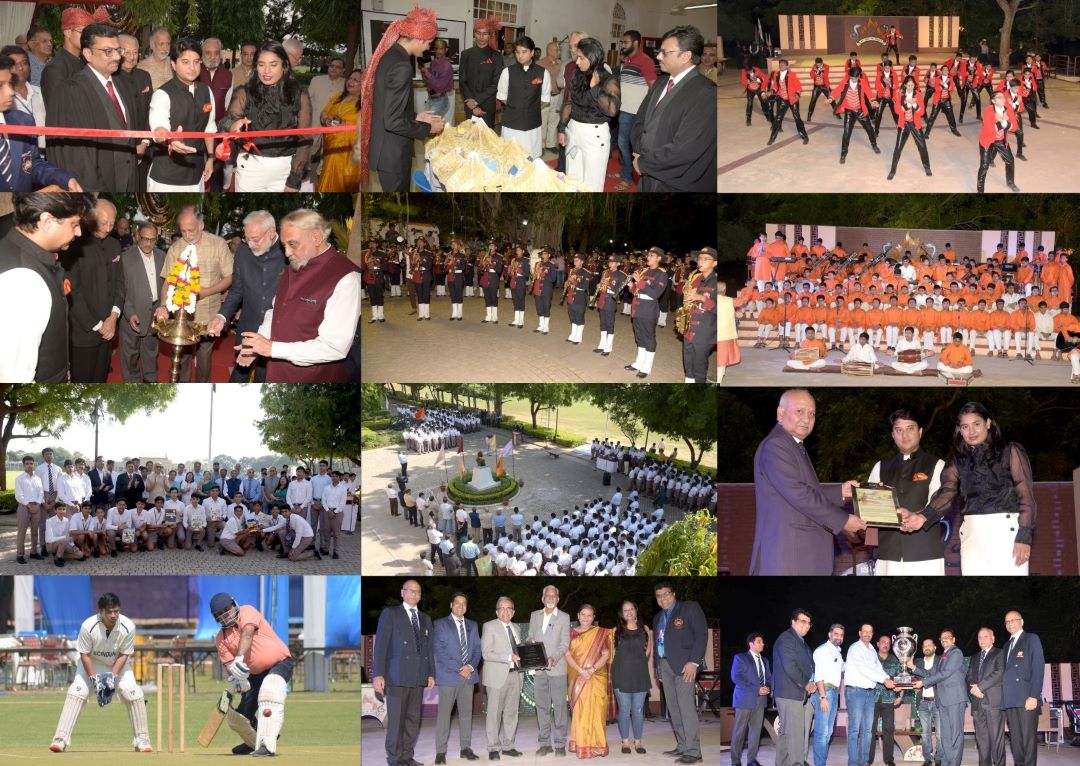 The grand celebration of the 125th Founder's Day of The Scindia School commenced on 19 October 2022. From 10 am to 1 pm, Parents' Day was held, in which the parent fraternity interacted with the teachers of their wards to know their progress in various verticals of school life. A cultural programme for Parents and guests was held at the Madhav Pavilion from 4.30 to 5.30 pm. The Deputy Senior School Prefect, Anubhav Sachan welcomed the guests. Samriddh Agarwal introduced the Brass Band as one of the finest in the country which thereafter played mellifluous tunes like Sam Bahadur and the River of Babylon. Next the Musical Band played foot tapping tunes in a medley called The Scindia Instrumental Mashup. The Hindi Play 'Bhidant' was staged, and the audience was left thinking if the goal of true education is to impart rational thinking. The play-Macbeth studied the consequence of unbridled ambition. The dance, representing the essence of all women who have fought against social stereotypes left the audience spellbound. The event came to a close with the Deputy Senior School Prefect, Vidit Gupta delivering the Vote of Thanks.
The celebration of the 63rd Old Boys' Day started at 11 am when the Cricket and Football match was played. At 2.30 pm SOBA AGM was held in the Assembly Hall. The main function started in the evening at 6 pm wherein an entertainment programme was organized by the Old Boys at the Shukla Memorial Open-Air Theatre. The 63rd Old Boys’ Day was presided over by Dr Amarender Singh (Ex- Madhav, 1979) as the Chief Guest. Justice Sanjay Misra (Lokayukta, Uttar Pradesh and President, The Scindia Old Boys' Association) also graced the occasion.
On the grand 125th Founder's Day, we welcomed Ms Mithali Raj, a recipient of Padam Shri, and the former captain of the Indian Women's cricket team as the Chief Guest. The Chief Guest took a round of the exquisite exhibitions put up by the boys. After the brilliant performance of the Brass Band, the school song was melodiously sung by the school choir. Thereafter the school orchestra left the audience spell bound with their cadences in 'Saaz-e-Rang', a wonderful musical composition. The Principal, Mr Ajay Singh read the Report of the year 2021-22. H H Maharaja Jyotiraditya Scindia welcomed the Chief Guest. In her speech and talk show, the Chief Guest talked about her lessons from life and congratulated the student body for the wonderful programme. Justice Sanjay Mishra was presented with the Madhav Award and citation was read by H H Maharaja Jyotiraditya Scindia. The ceremony of handing over the lamp by the Madhav awardee to the youngest Scindian which is symbolic of the traditions of the school, was held. Annual awards were announced, and a wonderful dance performance captivated the audience. The celebration came to a close with the Vande Mataram.