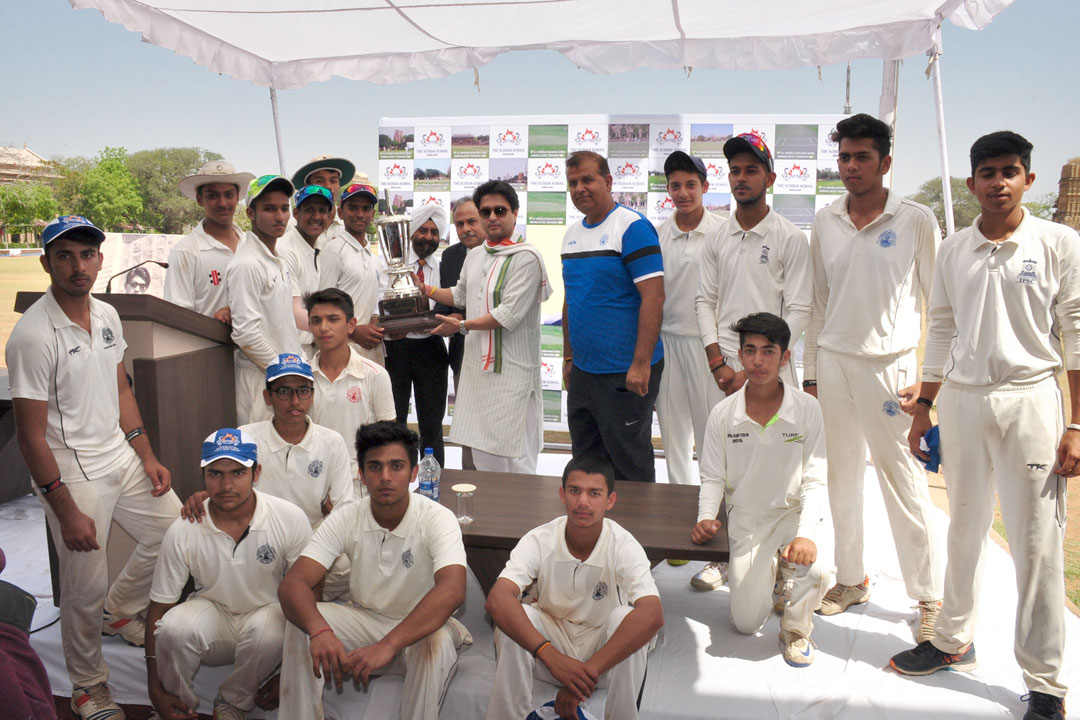 The 15th H.H. Maharaja Madhavrao Scindia Memorial Cricket Tournament was played from 31st March 2017 to 4th March 2017.
Nine schools namely YPS (Patiala), YPS (Mohali), The Doon School (Dehradun), MNSS (Rai), Modern School (New Delhi), The Mayo College (Ajmer), DPS Mathura Road ( New Delhi), DPS R K Puram (New Delhi) and The Scindia School (Gwalior) participated in the tournament. The matches were held at Madhav Field, Oval Field and Junior House Ground. The event was conducted under the patronage of Principal, Dr Madhav Deo Saraswat and guidance of Mr Naman Saraswat, Director of Sports.
The fixture of the pools were drawn on 30th March 2017 in the presence of all the managers and coaches. The tournament was played on league cum knock out basis. All the matches were played on turf and matting wickets.
The rules were as follows:
· Each team shall bat for maximum of 25/30 overs or if gets all out, whichever is early.
· If the team fielding first fails to bowl 25 / 30 overs within the scheduled time and in the opinion of umpires the batting side wasted time deliberately then the team playing second will be entitled to play the full quota of overs. However, in the opinion of umpires if the bowling side wasted the time deliberately (then the remaining overs must be completed after the schedule time ) however the team batting second shall be entitled to play the number of overs they bowled to batting side in schedule time.
· If the team batting first is dismissed in less than the allotted number of overs (25/30 overs), the team batting second shall be entitled to bat for full quota of allotted overs (25/30 overs).
· If the team fielding second fails to bowl 25/30 overs within the scheduled time, the hours of play shall be extended until the required number of overs have been bowled or a result achieved, provided in the opinion of the Umpires, the light and weather are suitable to continue the match.
· The Umpire’s decision shall be binding on all and no protest shall be entertained against the decision/s.
The boys assembled for opening ceremony on 31st March 2017 at Madhav Field. After the morning assembly Principal, Dr Madhav Deo Saraswat addressed the participants. Dr Saraswat motivated the players and said that sports is not only an opportunity to manifest one’s skill on the field but also a chance to foster new relationship and grow as an individual. Principal, Dr Saraswat motivated the young players to cherish and enjoy success.
Principal, Dr Saraswat stated that a true character is observed when a player is on the verge of defeat. Therein lies his ability to show his value system which he has imbibed from his coaches. Then Principal, Dr Saraswat declared the tournament open.
The matches were played in the true sportsmanship spirit and the teams gave a tough competition to the opponent teams. It was indeed very exciting to watch the teams play with zeal and vigour.
His Highness Jyotiraditya Madhavrao Scindia, President Board of Governors was the Chief Guest on this occasion. It was a very proud moment when His Highness Jyotiraditya Madhavrao Scindia witnessed the match for a while along with the Scindian fraternity. The band display was an added attraction as the band boys played some memorable tunes such as By The Rivers Of Babylon, Aye Watan Aye Watan under the leadership of Band Major, Rekeela Bhutia.
Principal, Dr Madhav Deo Saraswat welcomed the Chief Guest. Dr Saraswat remembered HH Maharaja Madhavrao Scindia with reverence, who is undoubtedly the most loved and cherished Old Boy as he represents the Scindian spirit. Dr Saraswat also welcomed Mr Ravi Patankar, Secretary Gwalior Cricket Division. Dr Saraswat thanked all the coaches, match officials, players and their Principals for taking part in the tournament.
His Highness Jyotiraditya Madhavrao Scindia gave away the trophies to the winners. The result is as follows: The trophy went to Modern School (New Delhi) and DPS Mathura Road (New Delhi) were the runners up.
Best Bowler of the Tournament: Kaushal of MNSS Rai. He took 12 wickets in 4 matches.
Best Batsman of the Tournament: Ayush Badoni of Modern School. He made 541 runs in 6 matches.
Best All-rounder of the Tournament: Hrithik Shooken of Modern School. He took 16 wickets and made 140 runs in 6 matches.
Then Dr Saraswat gave a token of appreciation to His Highness Jyotiraditya Madhavrao Scindia who admired the players for putting up a stellar show of sportsmanship, comradery and perfect team spirit. The fabulous final match left an indelible impact in everyone’s mind. His Highness Jyotiraditya Madhavrao Scindia motivated the players to always work in unison, a lesson which ought to be remembered on and off the field. He specifically applauded the spirited comeback of Vaibhav Kandpal from DPS Mathura Road, New Delhi. His Highness Jyotiraditya Madhavrao Scindia noticed how Vaibhav was congratulated not just by his team but by all the spectators for a fabulous game. The sportsmanship spirit displayed on the field was a testament of their coaching.
His Highness Jyotiraditya Madhavrao Scindia felt glad to note that the tournament is organized each year, in loving memory of his father, HH Maharaja Madhavrao Scindia, who learnt and later exhibited the true spirit of sportsmanship on the same field along with M A K Pataudi and Sunil Gavaskar. Then all the participants were given the certificates by Principal, Dr Saraswat and the event ended with a vote of thanks by SSP, Snehil Tripathi.