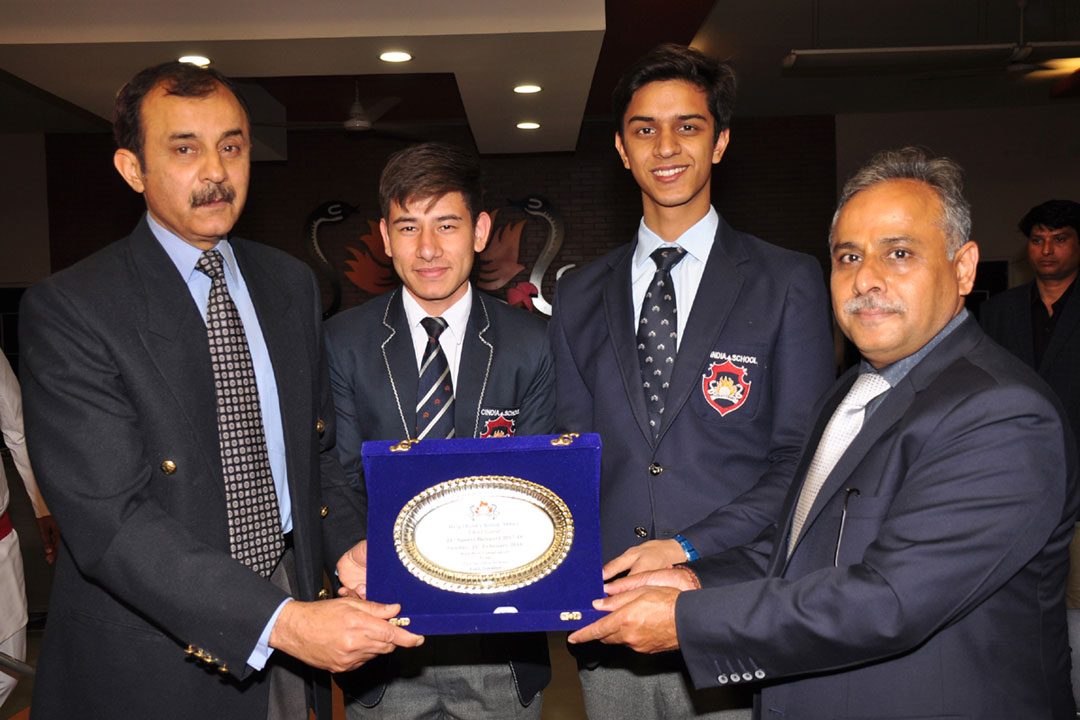 In order to honour the outstanding sportsmen of The Scindia School the 23rd Annual Sports Banquet was celebrated on the 25th of February, 2018. It was a momentous occasion for the meritorious students of the Sports arena, who have exhibited exceptional talent and have secured Full and Half Colours in various games. The Chief Guest on this occasion was the much decorated, Brigadier Ashok Abbey, AVSM, who was accompanied by his wife, Mrs. Nandita Abbey. Brigadier Abbey is an alumnus of the prestigious Indian Military Academy, Dehradun. He is a keen and avid mountaineer and an alpine skier. Eminent old boy, Mr. Vijay Jaini and parent representative, Board of Governors, Mrs. Darshana Jaini also joined the celebrations.
The coveted Brass Band of the School, displayed a symphonic performance upon the arrival of the Chief Guest. The Principal, Dr. Madhav Deo Saraswat extended a warm welcome to the Chief Guest and mentioned that he was overwhelmed by his achievements. He complimented him for not only being an exceedingly accomplished mountaineer but also a perfect gentleman. In his address to the students Dr. Saraswat cited that people like Brigadier Ashok Abbey set the right references, especially for the youth, who should emulate him and lead a life which is full of meaning and purpose. The Principal concluded by raising a toast for the Chief Guest.
Thereafter, Rekeela Bhutia, the Sports Captain of the School raised a toast for sportsmen leaving the school and stated “Life does not give you what you want, but what you deserve”.
The Chief Guest expressed his delight for being a part of the Annual Sports Banquet and reminded the students of their privilege on being a part of the legacy called ‘Scindia’. Brigadier Abbey was astounded with the array of opportunities the School provides its pupils and advised the students to make the best use of it. He expressed his admiration for the way in which the School has balanced traditions with modernity. In his address to young Scindians, he reiterated the significance of sports in shaping a person and further pressed upon it by quoting Kurt Hahn “Without the instinct for adventure, any civilization, however enlightened; any state, however well-ordered, will wilt and wither”.
The august gathering congratulated the boys who represented the School at various State, IPSC and CBSE level tournaments and also the National Players of the School for the session 2017 - 18. The evening winded up with a sumptuous four course dinner and the presentation of a token of appreciation to the Chief Guest.