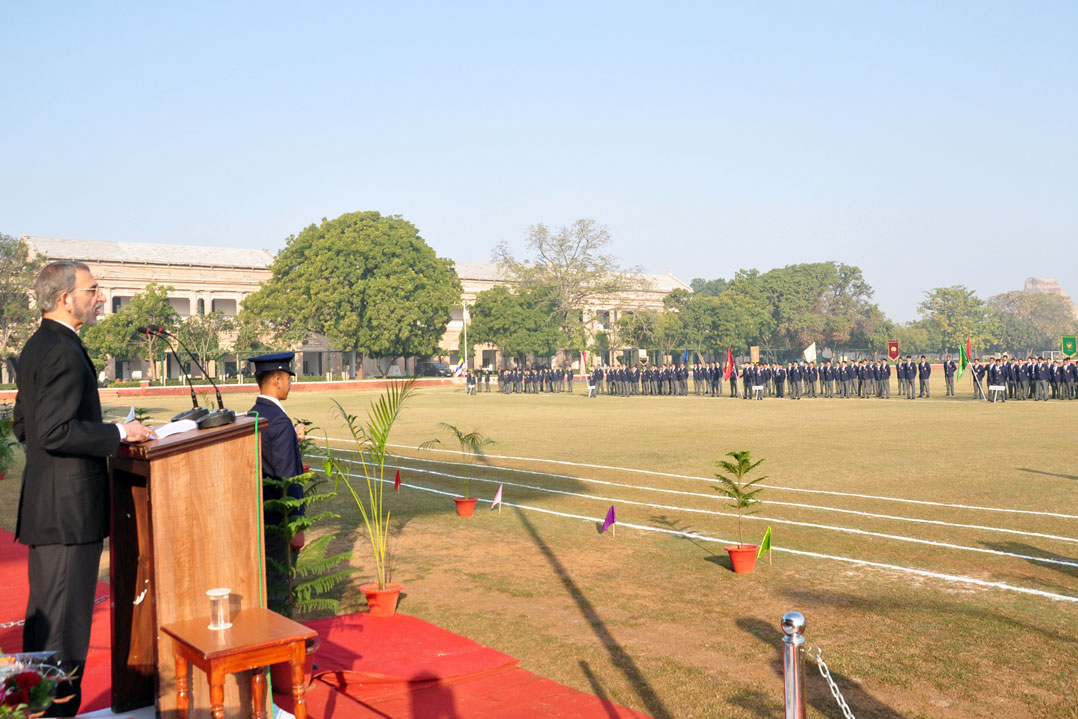 The country’s 67th Republic Day was celebrated on 26th January 2016 with great pride and honour. The Chief Guest on this occasion was Mr Sanjeev Kathpalia, an eminent Old Boy of the school, Batch of 1968. Mr Kathpalia is the Chief Advisor to the Republic of Turkey in the Prime Minister’s Investment Support and Promotion Agency. Mr Sanjeev Kathpalia is an alumni of IIT Delhi and IIM Kolkata. Mr Kathpalia has served the Unilever Group and has also served as the President of the Belgian ETEX group of their South Asia’s operations supply chain and R&D.
Mr Kathpalia was given a ceremonial welcome as he was escorted to the Madhav Field by the School Horse Riding Team. Upon arrival the Chief Guest was introduced to the faculty. After the flag hoisting ceremony the school band played some tunes led by Under Officer Kuldeep Umraiya. It was followed by Inspection of Parade by the Chief Guest who was escorted by SSP, Arindam Bharadwaj accompanied by Aviral Jain and Nitesh Thakuri. The highlight of this year’s parade was the participation of Class of 1983 in the Republic Day Parade.
Soon after this the Principal, Dr Madhav Deo Saraswat addressed the gathering and expressed his gratitude to the freedom fighters. Dr Saraswat motivated the boys to help the nation to progress towards peace, prosperity and harmony. The Principal advised the boys to find a purpose in their lives and realise their latent greatness as the boys are endowed with boundless possibilities.
In his inaugural address Mr Kathpalia motivated the boys and said that an entire undiscovered world lay ahead beckoning them to explore the unknown. He reiterated the fact that the knowledge he got from his teachers has left an indelible impact in his life even though net has a plethora of information. The character development in these formative years will always be a motivating factor in life thereby imparting holistic education. The present generation has plenty of choices and they must strive hard to shape their future and pass on the legacy to the next generation. At the end he recited `The Road Not Taken’ by Robert Frost eloquently. Click here to listen the speech
Then students, faculty and guests moved to Astachal where rich floral tributes were paid at Gandhiji’s statue. A patriotic song by students of Junior House was a befitting tribute to the freedom fighters. Then Mr Raman Tandon and Mr Rupen Chakravarty; representatives of Class of 1983 addressed the gathering. They owe their success to the teachers and felt proud to be a Scindian. The school taught them to fight and they motivated the boys not to be scared of falling but have the courage to rise after a fall.
After observing silence for a minute a Group Photograph of Batch of 1983 was taken at Astachal. Then the Old Boys and the faculty members proceeded to Principal’s residence for breakfast. At the end the Old Boys had an interaction with school Review team and then they departed for their respective places of stay. The boys felt spirited and the feelings of patriotism could be felt in everyone’s heart.