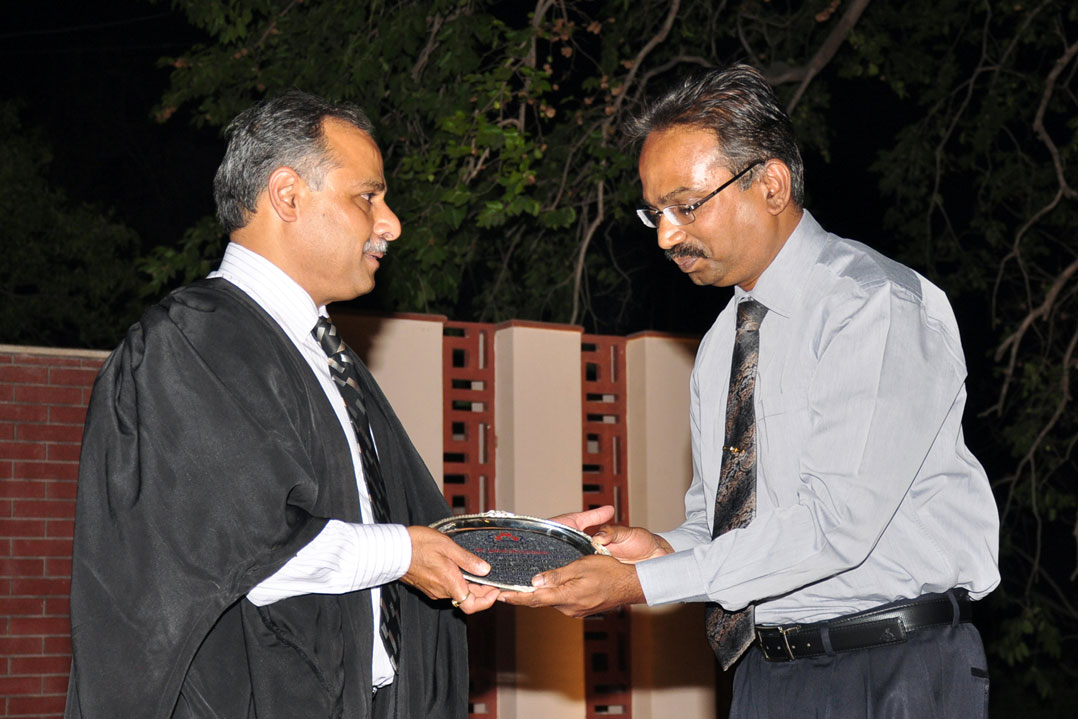 on 21st April 2016 the school bid adieu to three faculty members; Mr. Dinesh Siriah, Mr Sumit Chakrabarty and Mr Ashok Shivraman. Earlier in the morning assembly Miss Jasmanpreet Randhawa, Mrs Gursharan Madaan, Mr Somnath Ganguly and Mr Ajay Kumar were given a warm send off.
The Principal, Dr Madhav Deo Saraswat spoke about `three gentlemen’ who represented wonderful attributes of a true teacher. Dr Saraswat found Mr Sumit a teacher par excellence who maintained perfect relation with teachers and students as he rendered his services. About Mr Ashok Dr Saraswat found him to be extremely dedicated and sincere. He called Ashok as a `humble soul` whose work ethics put him in the forefront.
Dr Saraswat considered Mr Siriah as the pillar of the school and read two letters written in his honour, one by a former student; Mr Rajiv Kumar and the other one by Mr D Jay Kumar, former HOD and HM. It was a befitting tribute to the illustrious career of Mr Siriah which spanned 35 years. They received a plaque as a token of love and appreciation.
Then Senior School Prefect, Mriganka Ghosh spoke about the commendable contribution of the three outgoing teachers.
Mr Sumit Chakrabarty, from the faculty of Commerce was also the House Master of Shivaji House. His democratic style of functioning and his constant motivation and counselling of students helped bring about a culture of excellence in the house and school.
Ashok Shivaraman taught Accountancy and Business Studies. He was also the in- charge of the ‘Inquisitive Society’. He was also the HOD of Commerce Department and a member of the editorial team of the Business Bugle. The prolific praise that he received from his students motivated and inspired him.
Mr Dinesh Siriah retired after a long and fruitful association with the school. He served the Junior school as Games in-charge. He was the Housemaster of Kanerkhed House for eleven and a half years and was also the in-charge of swimming for the senior section of the school. Lately he looked after the Photography hobby in school. Mr Siriah participated in several trekking expeditions and an advanced rafting course.
At the end of the ceremony it was felt that although we may be separated by time and distance nothing will diminish the important role that have played in our lives and always will. The school wished them amazing experiences and the journey of a lifetime.