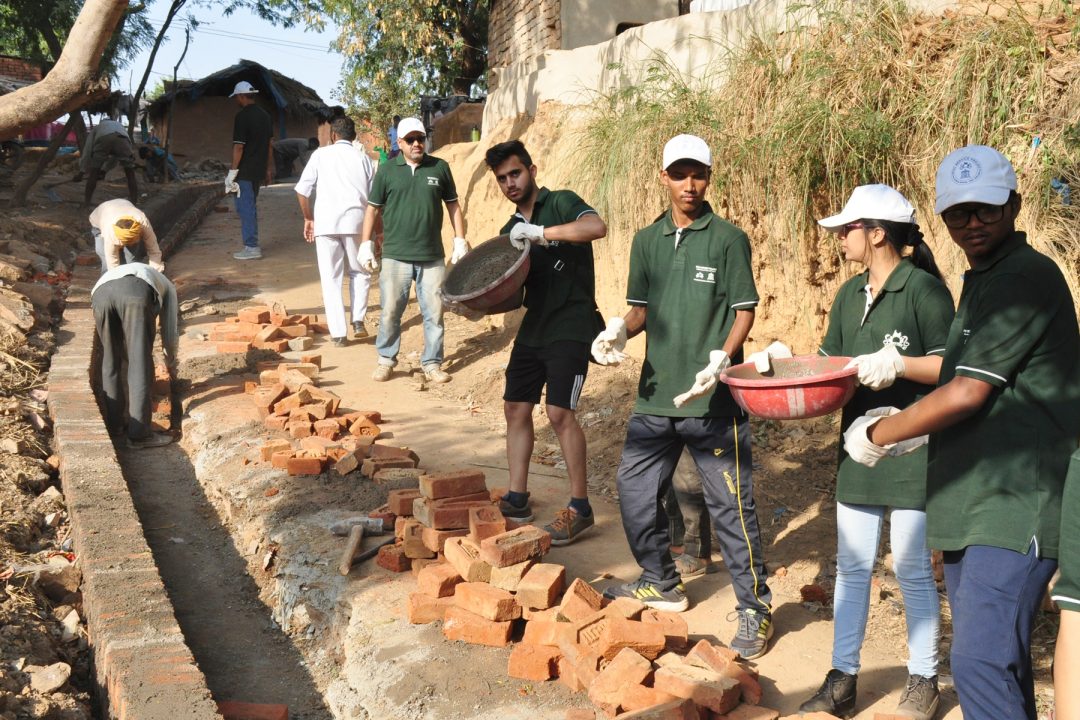 The Scindia School, Fort, Gwalior (1897) has a long standing commitment towards service to society. In continuance with the school’s commitment towards the less privileged members of the society the 5th Social Service Project under the aegis of IPSC, was organized at Nathon Ka Pura, the same village, where the Inaugural IPSC Service Project was conducted in October 2012. Nathon Ka Pura, a 60 years old village is situated 20 kms away from Gwalior. It is primarily a village of snake charmers with a population of approximately 1500 distributed over 110 families.
The IPSC Service Project is from 24th October to 29th October 2016 with the participation of 44 students and 13 teachers from 5 schools. The participating schools are Maharani Gayatri Devi Girls’ School, Jaipur, Rajkumar College, Rajkot, Cambridge International School, Phagwara, The Daly College, Indore and the host, The Scindia School, Gwalior. Some school went for light and sound show at Man Singh Fort soon after registration on 24th October 2016.
They were divided into three main groups namely Lokendra, Gandhi and Vinoba at the time of registration. The main objective of the project is to build a 300 meter channel for the villagers.
The villagers were eagerly looking forward to welcoming the IPSC Team. There was a marked improvement in terms of cleanliness since the first project and they showed keen interest in working along with the participating schools for the project.
It was a great moment to watch students and teachers work in tandem with each other. The children and the teacher escorts joined hands and worked with lots of enthusiasm as they picked up bricks and passed the concrete mixture for the construction of the channel. Substantial amount of work was done on the first day and the remaining work was scheduled to be completed the next day. The students felt highly motivated when the Principal, Dr Madhav Deo Saraswat briefed them about the project before its commencement. Dr Saraswat told them to practice compassion and be sympathetic and thoughtful while interacting with the villagers. The stark contrast in their upbringing will make the children be mindful and try to bring a difference in their lives by their noble deeds. The entire project will be conducted under the guidance of Dean of Social Welfare, Dr B S Bhakuni.
The waste water from a nearby hand pump was channelized to the exit. The students constructed a channel and the plastering will be done by the students in collaboration with the mason tomorrow. The students and villagers worked in close association for the construction of the channel. The delegates along with the boys and girls from the village will paint the huts of many villagers with great enthusiasm.
Spending long hours in the village and interacting with the villagers gave the delegates an insight into their life, problems, the challenges they face and the evils that plague them.
On 24th October all students were divided into three groups. Group 1 Lokendra Group was asked to prepare a 10 minute skit on rising life expectancy in rural India. Group 2 Gandhi Group had to prepare a skit on saving a girl child. Group 3 Vinoba Group’s topic for the skit was ban on drugs and alcohol. The students will give creative expression to their experience by performing three skits in Nukkad Natak style on 27th October 2016. The successful partial completion of the channel at the end of first day filled everyone with a feeling of satisfaction and pride. The selected Scindians from Class XI and XII could be seen working hard at the construction site along with delegates from other schools.
click here to see photo album of camps 2016.