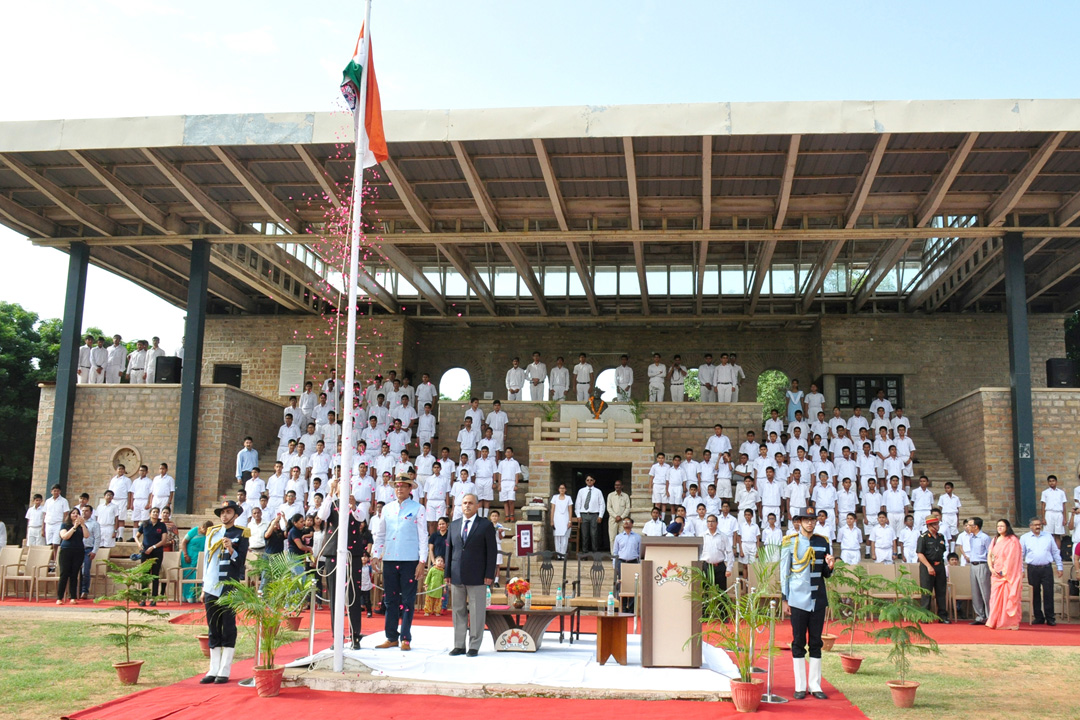 Fervour and gaiety was in the air at the dawn of the 71st Independence Day of our great nation at The Scindia School. The celebration commenced with the arrival of the Chief Guest, Mr. Dhirendra Chauhan, an old boy of the Batch of 1966. After a formal introduction with the faculty, the Chief Guest hoisted the national flag and inspected the contingents of the parade which was followed by a crisp march past on the tunes of Jai Bharti, played by the proud members of the School Band.
Principal, Dr.Madhav Deo Saraswat, in his thought provoking address to the school reminded the boys that humility is a value, which is deeply engrained in each Scindian. Dr. Saraswat motivated the boys to nurture the spirit of humility in all walks of life. In keeping with the occasion, Dr. Saraswat urged the community to strengthen itself for the betterment of self and nation. He elaborated on the importance of strength of character which can be achieved through emotional, mental and spiritual growth. Immediately after the Principal’s address, the Chief Guest, Mr. Dhirendra Chauhan expressed his gratitude for being invited as Chief Guest. In a conversation straight from his heart, he suggested the boys to inculcate the value of excellence in all their endeavours.
As customary, after the formal proceedings, all the members of the community congregated at Astachal where floral tributes were payed to the Father of the Nation. Arjun Dewan, an old boy of the Batch of 2002 expressed his feelings eloquently and mentioned how wonderful it was to be back. Principal, Dr. Saraswat, through a personal anecdote expressed the beauty of the relationship that exists between the teacher and the taught, especially in a residential school. The silence, which was observed for a couple of minutes thereafter, provided the much required space to soak in and look within.
The soulful event ended with an informal interaction of the faculty along with the Chief Guest and the old boys over breakfast at the sprawling lawns of the Principal’s Residence. Click here to see pictures gallery on Facebook.