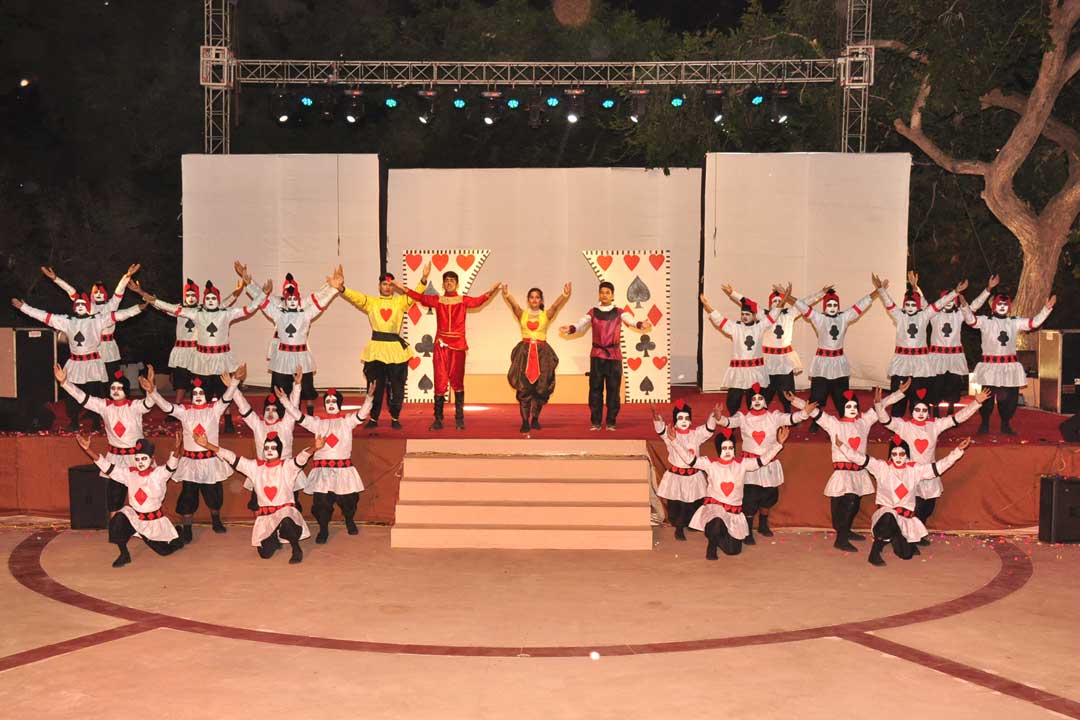 Founders' Day is traditionally a very important day in the school calendar when members of the school community - students, governors, staff and friends meet to commemorate those who founded the school and who have bequeathed resources to its development. The chief aim is to actively develop the ambition and potential of every student, whether it is academic or any other sphere. The school believes that a student can achieve anything with focus, perseverance and confidence. The Old Boys said unanimously that they owe their education to their founders. An atmosphere of celebration filled The Scindia School when the students and teachers gathered to celebrate the 119th Founder’s Day.
The three day event began with Parents’ Day on 20th October 2016. The Scindians escorted their respective parents and there was parent teacher interaction in the morning, wherein pertinent questions about the child’s performance in Term 1 were answered by the teachers and Deans. It was followed by open house in which candid feedback from parents was highly appreciated by the school.
The evening began with the arrival of the Chief Guest, Shrimant Her Highness Maharani Priyadarshini Raje Scindia, wife of President, Board of Governors, His Highness Maharaja Jyotiraditya Scindia at Shukla Memorial Open Air Theatre. Before arriving at SMOAT Her Highness admired the exhibition and highly appreciated the students’ work.
The programme began with the School Song. Principal, Dr Madhav Deo Saraswat welcomed Her Highness on behalf of the entire Scindian community. Dr Saraswat expressed his appreciation and said that Her Highness Maharani Priyadarshini Raje Scindia is an icon of elegance and charm as she symbolizes beauty and grace. She carries her manifold responsibilities with aplomb.
After the formal welcome of the Chief Guest Shrimant Her Highness Maharani Priyadarshini Raje Scindia addressed the gathering. Maharani Priyadarshini Raje Scindia said that she was truly blessed to be a part of the Parents’ Day function. It was a great pleasure to be amidst the boys and be a part of the three day long festivity.
Her Highness Maharani Priyadarshini fondly recalled her memories and considered it as a warm home coming each time she visited the school as it held lots of nostalgic memories. Her Highness felt that every stone, every artefact came to life and she relished the joy she felt when she stepped inside the sprawling campus. She was pleasantly surprised by the wealth of talent be it literary, artistic or technical excellence. The exceptional mentoring by the Principal, Dr Madhav Deo Saraswat and the teachers will definitely nurture a lifelong bond of an exceptional relationship. She called the Scindians as true path breakers. It was immensely gratifying to see the Scindians blossom into fine gentlemen. Her Highness wished the institution to grow from strength to strength.
Then a theatrical presentation entitled, "Tagore’’ was staged at SMOAT. It was a modern adaptation of Rabrindranath Tagore’s biopic. The musical dance drama was based on the works and life of Guru Rabindranath Tagore, a legendary poet, writer, educationist and philosopher.
The play covered major incidents of Tagore’s life from childhood to adulthood in very innovative scene sequences which included feelings of joy, sorrow, humour etc. The scenes depicted Rabindranath Tagore’s renowned creations such as ‘The Waterfall’, ‘Kabuliwala’, ‘Geetanjali’ etc. The entire presentation used a flawless combination of acting, dance and Rabindra Sangeet. It was directed by Mr. Abhinav Goyal, the Associate Director was Mr. Rrahul Raj, the Creative Head was Mr. Nikhil Raj Sharma and it was choreographed by Mr. Raj K Das. The flawless performance and perfect timing were the salient features of the play.
It was announced that Mr Gagan Khosla began his cycling expedition from Leh on 21st September 2016 and finished it today, ie 20th October 2016. The success was dedicated to The Scindia School. The evening concluded with a vote of thanks by Deputy Senior School Prefect, Aditya Banka on this joyful occasion of Parents’ Day and everyone looked forward to the next day.
Please visit to see photo Album
Please visit to see complete evening program on PTM 2016