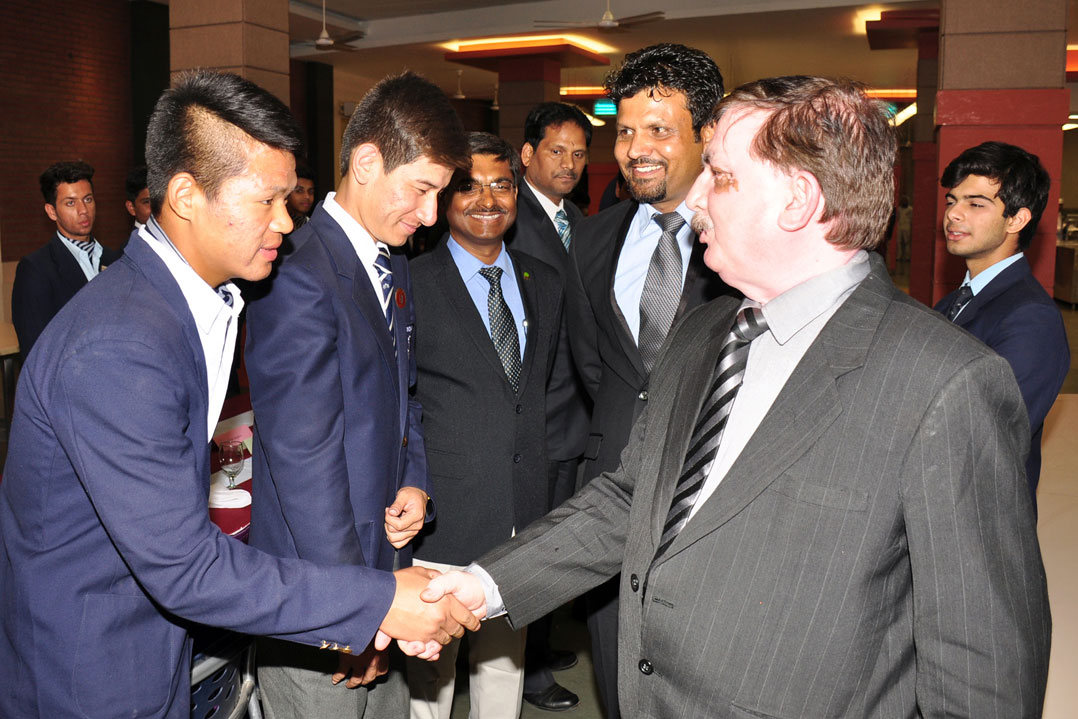 The 21st Annual Sports Banquet 2015 -2016 was held on Saturday, 26th March 2016 in the Dining Hall. The Chief Guest on this occasion was Prof. Dilip Kumar Dureha, Vice-Chancellor – LNIPE, Gwalior. The dignitaries who graced the event were Mr Harvinder Singh Sodhi (Former India – A Cricket player and currently coaching the M.P. Ranji Trophy Cricket Team) as a special invitee, Mr. G.S. Bakshi (Director- Alumni Relation), Mr. Naman Saraswat, Director Sports, Dean of Studies, Mr Dhirendra Sharma and Bursar, Col. (Retd.) Sanjiv Kaushal.
To mark the occasion Principal, Dr. Madhav Deo Saraswat raised a toast for the Chief Guest. It was followed by a toast for Mr. Harvinder Singh Sodhi by Mr Naman Saraswat. Then Shashwat Puri raised a toast for sportsmen leaving the school. At the end Akash Jaini, School Games Captain did the honors for the school. The prestigious event was attended by coaches, in charges and captains of various games along with meritorious boys who got Full and Half Colours in various games.
The august gathering congratulated the boys who represented the school at various State, IPSC and CBSE level and also in National and School National Games. Teyjanveer Singh Boora and Sarthak Talwar of Class XII were awarded the coveted School Sports Blazer for the year 2015-16. The Cariappa Shield was given to Harish Kumar for being the Sports All-rounder of Class XII. The Mahendra Mishra Award for All-rounder sportsmen of Class XI was given to Shivansh Kalra. The Nepal Trophy winners were fondly remembered on this occasion. In all it was a moment of great pride and joy and the evening was appreciated by the winners and achievers along with their mentors.