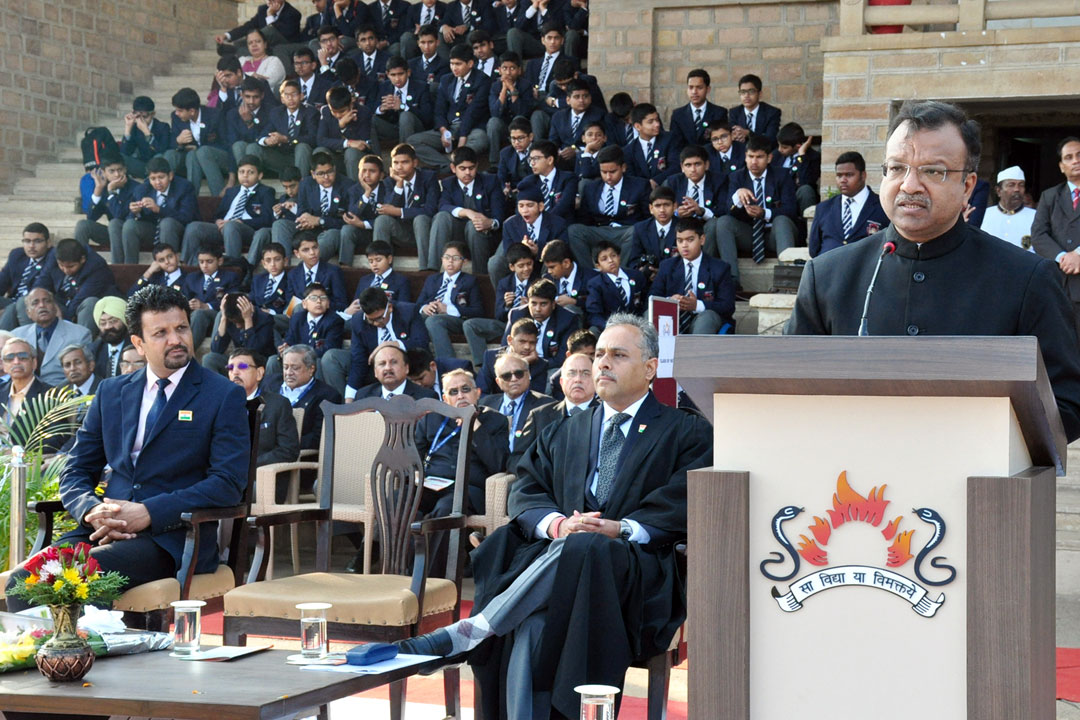 On 26th January, 2017 the old boys from BATCH OF 1966-67 witnessed 68th Republic Day Parade at Madhav Pavilion. The Chief Guest on this occasion was Dr Subodh Agarwal, IAS, Vivekananda – 1983, Principal Secretary, Food Civil Supplies And Consumer Affairs, Rajasthan.
Upon arrival the Chief Guest was introduced to the faculty followed by flag hoisting and national anthem. Dr Agarwal inspected the parade and then the contingents marched with grace and perfection. The Old Boys too had joined the marching squad.
Principal, Dr Madhav Deo Saraswat welcomed the Chief Guest, Dr Subodh Agarwal, Old Boys from the Batch of 1967 and the Scindian fraternity. Dr Saraswat remembered all the great leaders who fought for the independence of the country. The present generation must prosper in today’s India which offers tremendous prospects of growth and success. Dr Saraswat emphasized that the unwavering integrity must be retained. The personal aspirations were sacrificed for a larger goal and each Scindian must vow to respect the sacrifices made for the honour of the country. The Scindians must have the courage to follow the right path and the conviction to think beyond personal gain. Then Dr Subodh Agrawal addressed the entire community and expressed his heartfelt thanks upon being invited as the Chief Guest. Dr Agarwal said that this momentous occasion allowed him to pay tribute to the school that shaped and moulded him to be a perfect citizen of the country. Dr Agarwal expressed his gratitude to his teachers in particular who taught him to handle unforeseen circumstances. At the end Dr Agarwal said that the students must always be curious, they ought to learn from failure and must remain humble and honest. Click here to get the complete speech.
They attended a special Astachal wherein after offering flowers at Gandhiji’s statue there was silence for a while. It was followed by handing over the Golden Jubilee Reunion Baton to the representative of next year Golden Jubilee Batch of 1968. To do the honours representatives of the batch of 1968 Mr Deepak Uppal and Mr Rakesh Himatsingka received the baton from Mr Nandlal Rane, Batch of 1967.
It was a very poignant moment to witness the ceremony. The address by the representative of next year Golden Jubilee Batch of 1968 made it all the more special. To capture the memorable moment there was a group photograph at Astachal of Golden Jubilee Batch.
It was followed by breakfast at Principal’s residence with faculty. They could be seen exchanging greetings, sharing experiences and interaction with each other.
The highlight of the moment was a Nukkad Natak presentation by some spouses of 1967 Batch. It was highly appreciated and applauded by everyone. Air commodore Kamal Singh and Mrs Sunita Mandelia recited self- composed poems. Principal, Dr Saraswat and his wife gave a token of love and gratitude to Old Boys and their spouses.
Then all the Old Boys accompanied by their spouses assembled in front of S.M.O.A.T and went for a round of the school. They were escorted by Student Ambassadors. In the afternoon they visited stall of Chandari sarees at Madhav Pavilion.
There was a get together in Art Room and it included Registration of Class of 1967. After a sumptuous lunch in the school dining hall they had an option to visit Jai Vilas Palace Museum in town. In the evening they moved to Man Singh Palace on Fort from their respective places of stay for Light and Sound Show followed by dinner at Mr. Rajkumar Garg’s residence. In all the two memorable days were thoroughly enjoyed by the Batch of 1966-67 and they departed with fond memories.
click here to see the photographs of the event. Click here to see the complete function.