Celebrations of The 73rd Independence Day 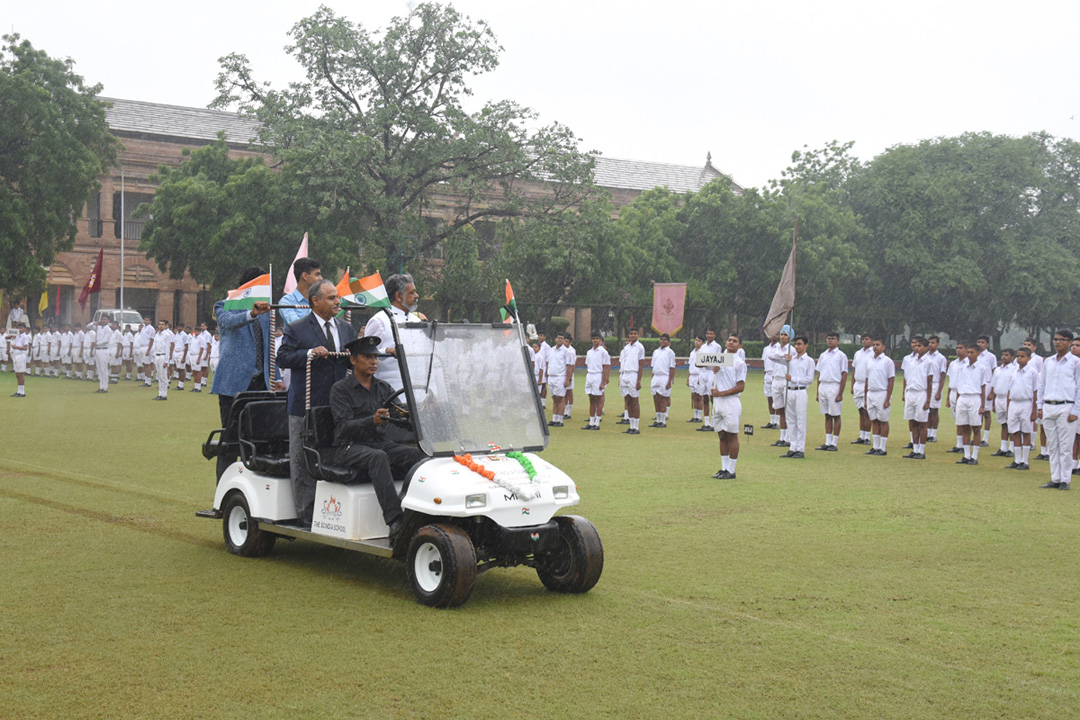 The 73rd Independence Day of our great nation was celebrated with fervour and gaiety at the Fort. It was yet again an exhibition of the unmatched spirit of Scindians and their never say die attitude. The celebrations started with the arrival of the Chief Guest, Captain Devendra Bhatnagar (Ex Jayaji, 1974) who amidst a light drizzle was escorted by the smartly turned out boys on horseback. He was received by Principal, Dr Madhav Deo Saraswat and other members of the senior management team. The intensity of emotions for the motherland and the showers grew together. However, nothing could deter the commitment of the parade that marched through the dais saluting the “Tricolour” and the Chief Guest.
Thereafter Principal, Dr Saraswat welcomed the Chief Guest, dignitaries, Old boys and parents. He congratulated the contingent for their flawless performance including the much decorated Brass Band of the School, which is one of the finest in the country. Dr. Saraswat was elated with the effort of the boys and reminded them that it is a manifestation of their perseverance, which must spill over in all the aspects of life. While addressing the gathering Capt. Bhatnagar expressed his gratitude for being a part of the momentous occasion. He mentioned an anecdote reminiscing the time when he marched to the tunes of the band as a young Scindian. He encouraged the boys to be a dreamer, as if it was not for the ones who dreamt of a free India, we would not have attained freedom.
After the inspiring words of the Chief Guest the Scindian fraternity left for “Astachal” the spiritual centre of the School, where Aditya Parashar, Senior School Prefect welcomed the gathering, especially the Old boys and their families. Floral tributes were paid to the statue of Mahatma Gandhi, which was followed by some thought provoking pieces and soulful singing. The silence at “Astachal” provided space for some soul searching and to gather the internal strength to persevere for being better, individually and as a community. Representatives of the batch of 1974 and 2004 came up and shared their feelings on being back to where it all started. Thereafter the Principal presented a token of affection to Capt. Bhatnagar and Mrs. Bhatnagar and also released a compilation of poems by Capt. Bhatnagar titled “Of Dreams and Mermaids”. The day ended with a feeling of fulfilment and informal conversations over breakfast. Click here to see the album. Click here to see the event.