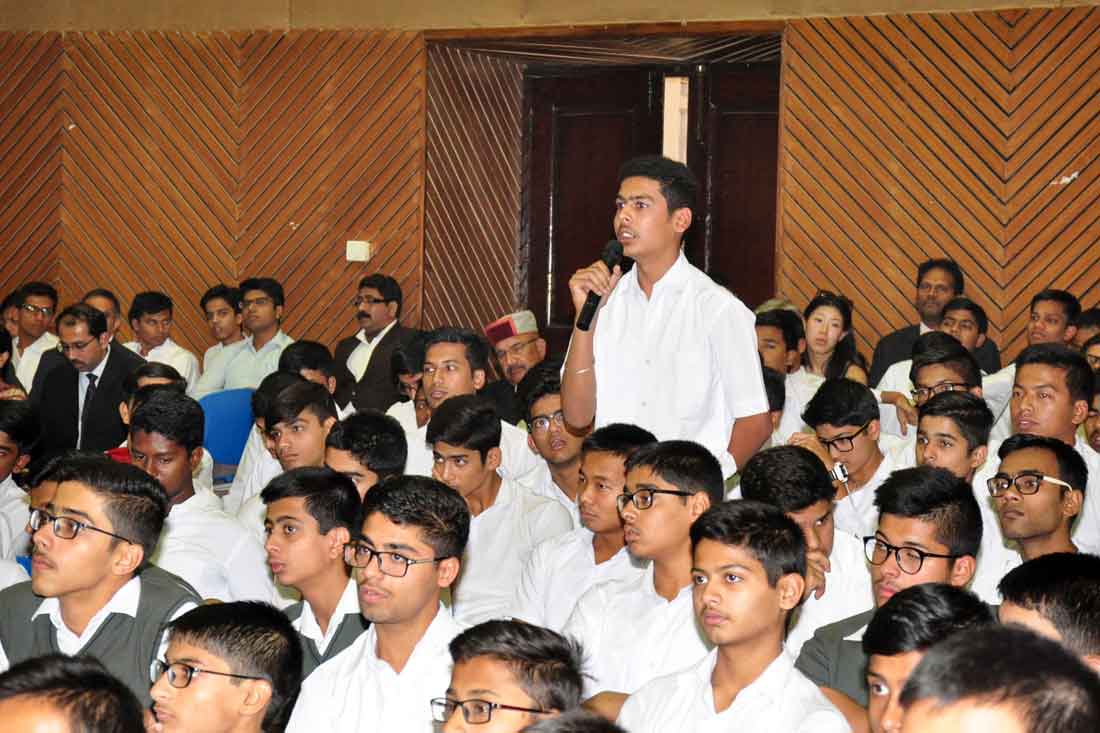 It was a very proud moment for Scindians to receive Chinese delegates for the China Global Philanthropy Leaders Program on 12th November 2016. The Delegation comprised of twenty eight CEOs and Founders of Corporate houses / Banks and NGOs.
The objective of their tour was to understand social enterprises and philanthropic initiatives in India. Their purpose of coming to The Scindia School was to understand the initiatives taken by the school pertaining to Social Service.
Upon arrival they were warmly received by Principal, Dr Madhav Deo Saraswat and staff members in front of the Assembly Hall. The School Brass Band greeted them with a melodious and synchronised performance by playing popular tunes such as By The Rivers Of Babylon, Fanfare etc.
A special assembly was organized in their honour. Principal, Dr Madhav Deo Saraswat welcomed the delegates and felt elated to share the school’s achievements with the Chinese delegation. Dr Saraswat emphasized on the school’s endeavours in instilling values for service in everyone present.
The school orchestra gave a beautiful rendition of soulful music derived from traditional folk music of North India, Raag Mishrapillu and Thumeri Ang. It was followed by a presentation on various Service Projects undertaken in the school. It gave the delegates an insight into the diligent and persistent involvement of Scindians in social service who believed in Service before Self.
It was a matter of great pride to say that 65065 hours of selfless service is rendered by the Scindians per year. The representatives of the Chinese delegation reciprocated the warmth and hospitality of the Scindians. Mr MA Weihua, Chairman, Hong Kong Wing Lung Bank Co Ltd, Former President, China Merchants Bank and Dean Wang and Dr Wang Zhenyao, President of The China Global Philanthropy Institute and Dean of The Beijing Normal University, China Philanthropy Research Institute addressed the gathering.
They were excited to be on the school and applauded the school’s efforts in combining modern education and technology. The secret of the school’s success lay in successful collaboration of community service values in tandem with modern education. They too shared the same values despite being geographically so far away. The learning process was clearly evident in various cultural and social activities conducted in the school. The Scindian spirit was highly appreciated by the delegates.
During open house some students asked pertinent questions related to the intent and purpose of their visit with specific reference to the mission of CGPI. They cited examples of promoting sustainable and attainable development through philanthropy. Dr Saraswat proudly mentioned that the boys dedicate 2-4 hours per week in engaging themselves in social service thereby they have the potential to change the face of the globe.
The Chinese delegation invited the students to be a part of collaborative work in the years to come. Dr Saraswat assured the delegates that they will get all professional support to get first-hand experience of a great nation.
Address by the head of the Delegation was extremely encouraging. Then there was a group photograph to capture the precious moment. The delegates admired and appreciated the exhibition on Community Service. After tea the delegates went on a round of the School Eco Park, Water Harvesting Taals etc and applauded the earnest efforts by the school.
After lunch they departed for a much awaited visit to the village, Nathon Ka Pura. Upon arrival at Nathon Ka Pura Village they got a feel of life in a village coupled by the untiring efforts of the Scindians in bringing about a radical change in the lives of the inhabitants. The scheduled visit was combined by a round of the village. While the delegates had tea and interacted with residents of Nathon Ka Pura Village they minutely observed the life in a village.
Later they proceeded to Usha Kiran Palace Hotel for rest. The day long visit culminated in Sound and Light Show on the Fort which gave them an insight into the remarkable history of Gwalior. The delegates felt extremely satisfied after the visit and promised to come again.
Click here to see photo album.