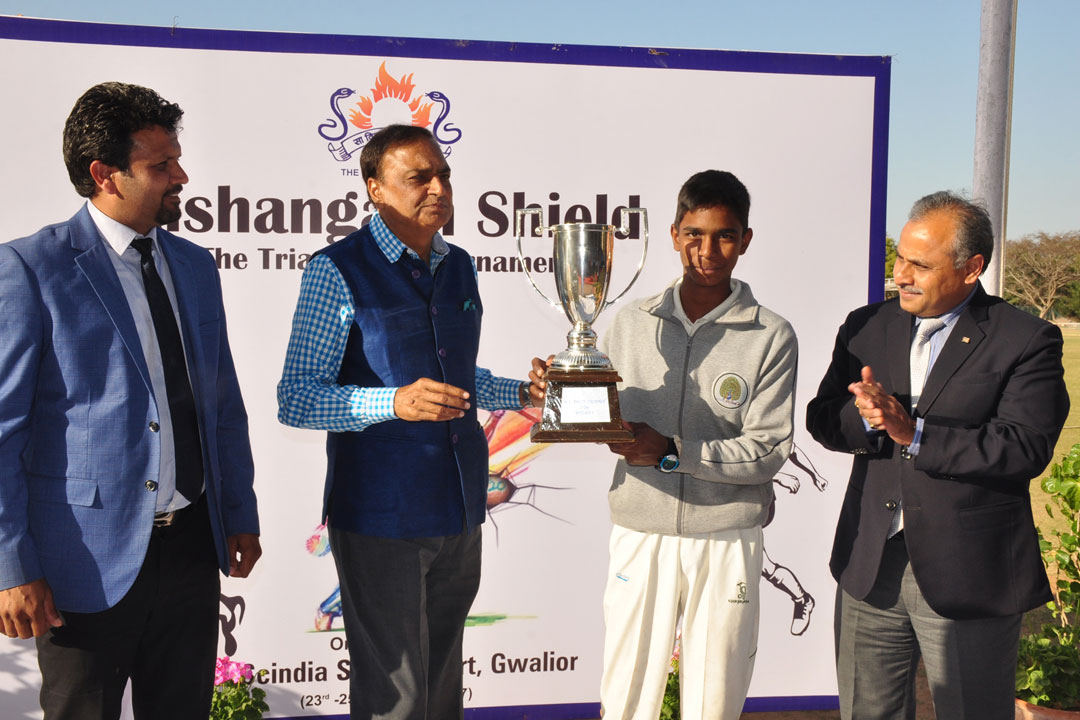 The Kishangarh Shield-2016-17, The Triangular Tournament played for unity, sportsmanship and Friendship among the Daly College, Mayo College and The Scindia School began on a positive note on 23rd February 2017. Nine matches were played in three sports i.e. Hockey, Soccer and Cricket.
Principal, Dr Madhav Deo Saraswat warmly welcomed the young boys and their teacher escorts from Mayo College, Ajmer, Daly College, Indore and the host school, The Scindia School. Dr Saraswat, in his inaugural address briefly mentioned the history of the event which dates back to 1930s. It continued for 85 long years. Since 2012 these three prestigious schools along with Doon School, Dehradun have been getting an opportunity to host the event and be a part of each other's culture. They nurtured a relationship during these days which center around the true spirit of a public school.
This tournament is specifically for Grade 6 and below students who display their sporting talent in the aforesaid sports. Dr Saraswat motivated the boys to just play together and thereby set a better bench mark. They ought to retain the culture and ethos on the sports field. The tournament featured hockey, cricket and football matches. Manjot Singh took the oath while the players stood in a semicircle. Then Principal, Dr Saraswat declared the tournament open and he was formally introduced to all the participants.
The opening cricket match was played between Mayo College and The Daly College in which The Daly College easily won the match by 63 runs. In the second session a Hockey match was played between The Scindia School and the Daly College. The match was a draw with no scores on the board. Later in the afternoon Soccer was played between The Scindia School and Mayo College. Mayo College won the match by scoring 1 goal against their opponent team.
Second day of the Triangular Kishengarh Tournament commenced with a Hockey match between The Scindia School and Mayo College. Mayo College boys outplayed their opponents and won the match. The second session of the day included a spectacular cricket match between The Daly College and The Scindia School. The Scindia School won the match by 6 wickets. They had to achieve a target of 115 runs. The opening batting partnership between Anoop Adiwasi and Ravi Adiwasi led the team to victory. Ravi Adiwasi, the Captain was splendid in his performance as he made 63 runs and took one wicket. The concluding match was a Soccer match between The Daly College and Mayo College. Mayo College won the match and the score was 2–1. The boys played with great enthusiasm and dedication in true sportsmanship spirit.
On 24th February 2017 the boys put up a remarkable and a fascinating entertainment evening which showcased their talent. It created a bond of friendship wherein they forgot about competitiveness which they exhibited on the field. They celebrated the joyous moment of being together in a wonderful campus which is strategically located on the Fort.
The prize distribution ceremony took place on 25th February 2017. The Chief Guest on this occasion was Mr Prashant Mehta, IAS, former President, Madhya Pradesh Cricket Association and Executive President, Gwalior Division Association. Mr Prashant is a keen lover of sports and under his guidance and encouragement many national and international players have achieved success in their career.
There was a wonderful mass display by junior house boys as they displayed a wave formation. Then there was an amazing performance by Brass band which played some soothing tunes such as Rasputin, E Vatan, By The Rivers Of Babylon, Takat Vatan Ki Hum Se Hai etc. It was smartly led by Under Officer, Rekeela Bhutia.
click here to see photo album The final result is as follows:
Hockey:
1. Best Goal Keeper Award…Vedarth Vyas Pradhan (Mayo College)
2. Best Defender Award…Anoop Adiwasi (The Scindia School)
3. Best Mid Fielder Award…Pratham Kohli (Daly College)
4. Best Player Award…Gourabh Singh (Mayo College)
Mayo College, Ajmer was declared winner of the Hockey Tournament.
Football
1. Best Goal Keeper Award…Anoop Adivasi (The Scindia School)
2. Best Defender Award…Manpreet Singh (Daly College)
3. Best Mid Fielder Award…Tushar Saini (The Scindia School)
4. Best Player Award…Aniruddha Sharma (Mayo College)
Mayo College, Ajmer was declared winner of the Hockey Tournament.
Cricket:
1. Best Bowler Award…Angad Singh (Mayo College)
2. Best Batsman Award…Arya Bhatia (Daly College)
Player of the Tournament was Ravi Adiwasi (The Scindia School)
Daly College was declared winner of the Cricket Tournament. The Kishangarh Shield went to Mayo College. Mementoes were given to Mr Pramod Chaturvedi, Head Master, Junior School, Mayo College and other teacher escorts.
At the end Chief Guest, Mr Prashant Mehta congratulated the players and motivated them to excel in life. Mr Mehta said that the players played like true sportsmen and the Scindians’ applause added to the entire event and made it memorable. It was indeed a very exciting tournament and the boys went back home with lots of memorable memories.