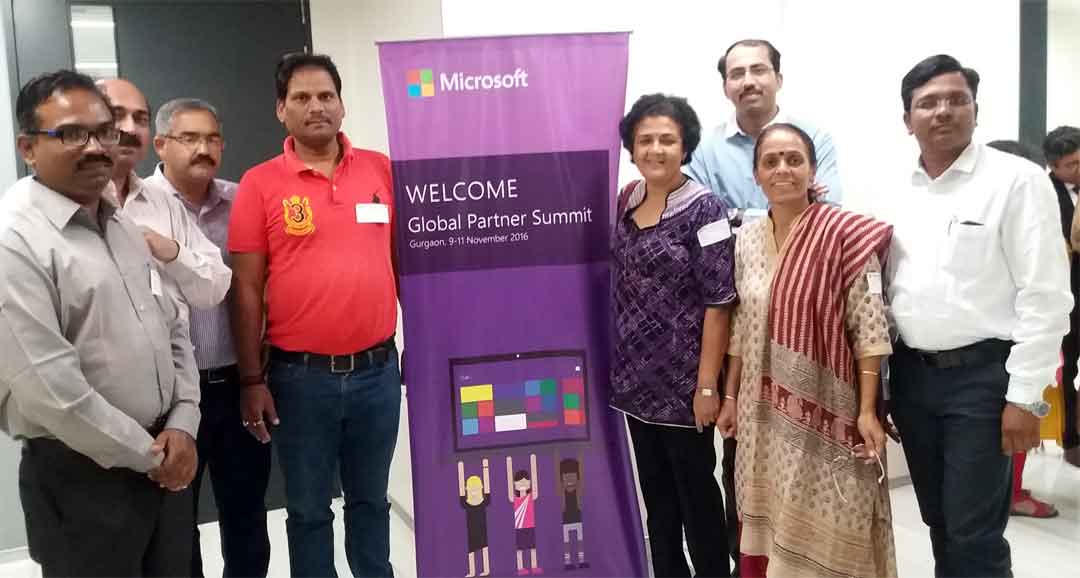 Eight teachers from The Scindia School; Mr Dhirendra Sharma, Dean od studies, Mr Gopal Chaturvedi, Mr Manjeet Beniwal, Mr Achinta, Mr Ashok Shivaraman, Ms Anita Pandey and Ms Raksha Siriah along with Mr Raj Kapoor, Dean of ICT got an opportunity to join Microsoft in Education Global Training Partner Program through participation in the summit. This invitation-only three-day summit was offered to partners who were well-versed in training educators and school leaders in primary and secondary schools. It encouraged the participants to embrace change and become aware of the impact by using technology anytime anywhere.
The three day session taught them how to successfully unpack the teacher training academies so that they can “train the trainer further”. The training session was conducted by NCCE team from Microsoft.
It was preceded by exhaustive pre work sessions, which was an integral part of their success at the summit. In order to maximize their learning the participants undertook five introduction courses in Windows 10 Anniversary Update, Introduction to OneNote, Office Mix, Sway and Microsoft Classroom.
Upon completion of the summit they have become an authorized Microsoft in Education Training Partner. By being a part of the partner program, their journey was filled with a wealth of resources (over 150 hours of face-to-face training materials), marketing support etc. Microsoft brought multiple trainers as they offered concurrent tracks that included unpacking face-to-face trainings material.
Mr Raj Kapoor, Dean of ICT attended the MSIA/CCGA track and got training in Touch Develop which taught him how to successfully deploy MSIA /Creative Coding through Games and Apps (CCGA) and understand the benefits of Imagine Academy. The CCGA portion focused on concepts and curriculum for beginning a computer science program. The other teachers attended Teacher Academy track which focused on classroom tools such as OneNote, Office 365, Sway, Microsoft Forms, Office Mix, etc. Participants of both tracks also had an opportunity to learn about Minecraft.
It was evident in the Summit that education is the core of Microsoft. The summit aimed to offer digital education and empower students to achieve more. It was reiterated that technology can be practised at grass root level anytime anywhere and on any device. A single account in Outlook gave them access to multiple benefits. The training provided resources and basic information about its usage and application.
The membership of Microsoft Education Community connected them to people all over the world. In all it was a very educational training session which will be further taught to the students. At the end of the training they were given a certificate by Microsoft.