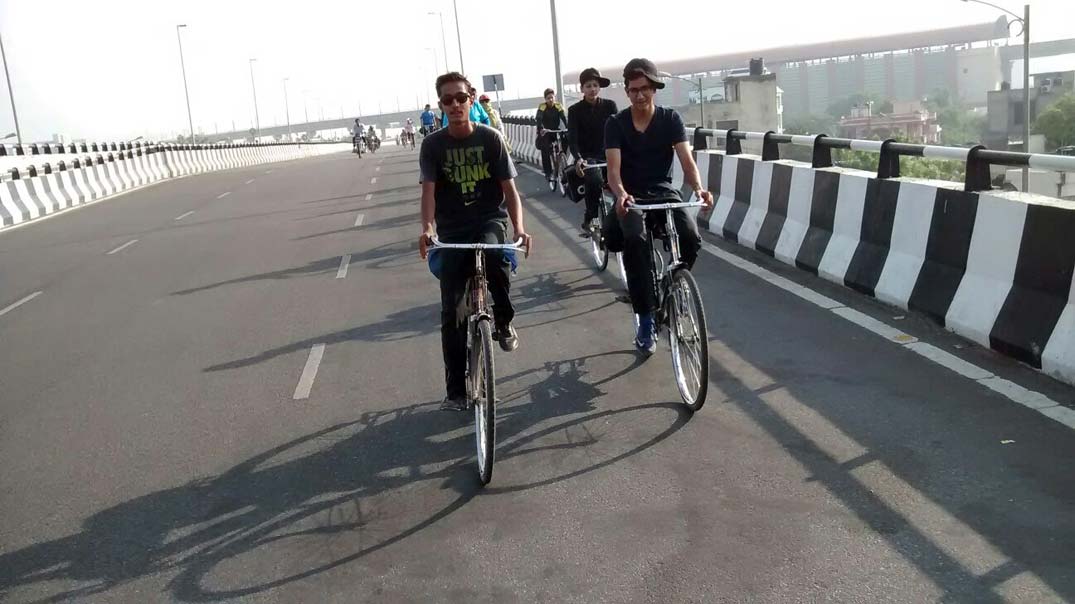 Amazing Pachmarhi Trip
The students of class VIII along with five teacher escorts attended an adventure camp at Pachmarhi. It was organized by the National Adventure Institute of Pacmarhi. Upon reaching Pachmarhi the boys were told about the rules and the regulations of the camp. There were schools from Ahemdabad and Northern as well as southern railway scouts for adventure. On the second day they went on a trek of 12 kilometers to Bee Fall and later they did rock climbing, valley crossing, and rappelling which was quite adventurous. The next day after a sumptuous breakfast the boys trekked for 7 kms till Jatashankar temple. As part of lessons learnt from cleanliness drive at school the boys collected all the wrappers in a gunny bag. The next adventure activity was obstacle crossing in which there were various activities like Chimney climbing, Russian wall, Ladder climbing etc. After this they were taken to the lake side field and the boys did horse-riding, archery and pistol and riffle shooting. Even the teachers had a lot of fun. There was a trek to Lod Shrug in the evening which is considered as the midpoint of India before Independence. The next day the trekked for 20 km to Choragarh and they had to climb 1600 stairs to reach the temple. On the way to Choragarh they visited Gupt Mahadev temple. It was indeed an incredible experience. On the last day Mrs M Manchma, the Deputy Director and leader trainer of the Bharat Scouts and Guides was invited as a chief guest. In all it was an enjoyable outing and everyone returned with fond memories.
Labour Camp:
The students of Class 10 visited Dodan Pura Village (Bhind District) for a Labour Camp from 23rd to 30th October 2015. The task assigned to them this year was to construct a wall and the dimensions were 100X4 ft. They successfully managed to accomplish the given task successfully. They also held a feast for the villagers and cleaned the roads of Bhind city in an effort to support the Swachch Bharat Abhiyaan.The entertainment programme presented by them was witnessed by the Collector of Bhind District and other dignitaries from the school. In all it was indeed an enjoyable experience for one an all.


Educational Tour of Rajasthan:
A group of 44 students of Class VI and VII from Nimaji and Kanerkhed House along with four teachers went on an educational tour to Rajasthan from 22nd to 30th October 2015. Despite a cumbersome train journey the boys were all set to explore the incredible state.

At Jaipur they visited places of historical interest such as Amer Fort, Jantar Mantar, City Palace, Albert Hall Museum and Satyanarayan Mandir. Moreover Choki Dhani was unique that captured the rustic spirit of Rajasthan and they relished the Rajasthani cuisine. Then they visited Brahma Temple at Pushkar and Dargah at Ajmer.

It was followed by Jodhpur and the young Scindians were spellbound by the awe inspiring Merangarh Fort, Jaswant Thada and above all the fascinating Umaid Bhavan. The visit to Bishnoi village was thrilling as they got a glimpse of the famous Black Buck and a variety of cranes. The visit to Osian Desert was spectacular and grand in its own way. They thoroughly enjoyed the camel ride and it was a treat to watch them slip and slide in the sand.

The team reached Jodhpur on the evening of 29th of October. The cycles were parcelled back to Gwalior and the jubilant delegation enjoyed a day of rest, sightseeing and sumptuous Rajasthani food at Jodhpur. Apart from a great sense of fulfillment at having achieved our target we returned with stronger bonds and a lifetime of memories.
ADVENTURE CUM EDUCATIONAL TRIP TO RISHIKESH:
The students of Grade IX got the thrilling opportunity to visit Rishikesh from 22nd to 30th October,2015.They were escorted by five faculty members. Despite the weary journey which was followed by the Founder’s Day fervour; the boys were all pepped up for a host of activities. River rafting in the mystique environs of the sacred Ganges was an unusual experience . The cold waters of the river did not dampen the spirit of the thrill seekers. They encountered various enthralling rapids named Roller Coaster, Golf Course, Sweet Sixteen, Double Trouble, Body Surfing, Return to Sender etc. it gave an instant adrenaline rush and was considered as a favoured activity by the team. Apart from rafting, trekking through Nandgaon village to Singhthali was both challenging and enjoyable. The scenic view of the Himalayan hilltops, waterfalls, sunset was captivating and a delight to the photographers. In the midst of nature, children pitched tents and cooked scrumptious food. The short trek to the ancient ‘Arundhati Cave’ was interesting as it comprised of artefacts and inscriptions. The students also enjoyed and learned the skills involved in rock climbing, rappelling and river crossing. Unwinding every night under a moonlit sky by the bonfire, singing songs to the strumming of the guitar, laughter and merrymaking made the trip truly memorable. The group surely has cherished memories and enriching experiences to narrate.
Class XI Rafting Experience at Shivpuri:
38 students along with 4 teacher escorts were a part of the Rafting Expedition to Shivpuri. The team left Gwalior on 22nd October and reached Shivpuri on 23rd morning. The day was spent at Bulls Retreat where the students were divided into teams and given instructions on various aspects of rafting, raft, safety drill, setting camps, toilets, dismantling camps etc. Next morning the team travelled to Bagwan by bus where the starting camp was set. The students had lunch and the teams were taken to water for the rafting safety drills and practices. In the evening, there was a de-brief and reflection session. The actual expedition began on 25th from Bagwan to Byas Ghat via Dev Prayag. It was the first day and everyone was apprehensive but as rafting began everyone forgot the anxiety and enjoyed the exhilarating experience. The day ended at Byas Ghat where they camped for the night. Next day ie on 26th October the teams started from Byas Ghat to Mahadevchatti. On the way they took a break at a waterfall where everyone was overjoyed standing under the fall and splashing in the water pool. They camped at Mahadevhatti at night and next morning started for Malakhunti. It was the most exciting day as they had to cross the WALL. Only a good swimmer and a strong hearted individual would try to cross it. About 20 odd students in four rafts with guides attempted the daring act. One of the rafts flipped over and everyone went overboard. The WALK course was about 6 seconds but it gave the thrill of a lifetime. The 4th day was the most enjoyable and exciting day of rafting with a lot of rapids. To name a few- Three Blind Mice, Golf course, Roller Coaster, Sudden death, Shivpuri rapid etc. The expedition ended at Rishikesh and everyone reached Bulls Retreat in the afternoon and took rest. In the evening there was a bonfire and get together wherein everyone shared his experience. It was a tiring yet an unforgettable trip. Next day after breakfast, they went for hiking and all the students wrote a letter about their experiences. After lunch, it was a day out to Rishikesh where the students got ample time to explore the city. They visited Ram Jhoola, Laxman Jhoola and were also fortunate to witness the Ganga Aarti. The students had a great day as no eating joint was left and everyone relished the sumptuous food to his heart’s content. After dinner they left for New Delhi by bus where they boarded the train for Gwalior. The team reached school on 30th morning. It was indeed an exciting trip which not only gave everyone them an opportunity to avail the bounty of Mother nature but also to know each other.
Click here to see photographs of various camps.