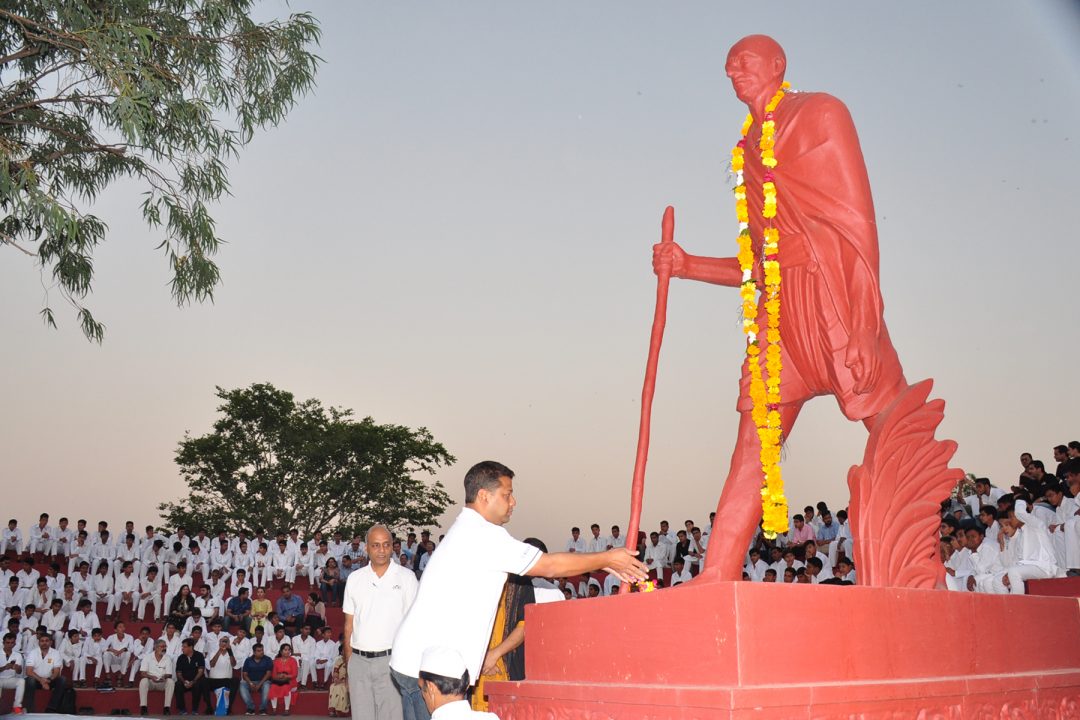 Old Boys’ Day was celebrated on 22nd October 2016. Batch of 1991 got together to celebrate their silver jubilee reunion. There was an exciting Cricket match between Old Boys VS Present boys in the morning. It was loudly cheered by the audience and it was a treat to watch the boys play with a great deal of enthusiasm. The enthusiasm carried on when the Old Boys interacted with the faculty during lunch. Each visit of the Old Boys is incomplete till they visit their respective houses and they were reminiscent of their good old days. SOBA Annual General Body Meeting was held immediately to select executive members for a change in leadership.
In the evening there was a special Astachal in honour of Old Boys. An entertainment programme was organized at SMOAT by the Old Boys. The Chief Guest on this occasion was Air Vice Marshal, Shouvik Roy, VM, ACIDS ICT, HQ, IDS.
The event began with the SOBA Annual Report for 2015-16. It is worth mentioning that in all 26 Chapters are there all over the world. The gathering was appraised of their projects as Mr Gopal Bhargava relinquished the tile. Mr Bhargava recognized, appreciated an appreciated the tireless efforts of his core committee. It was announced that the new President of Central SOBA is Mr Rahul Kulshreshtha.
Air Vice Marshal Shouvik Roy (16088-T) F(P) is a Cat A2 Qualified Flying Instructor with around 10,000 hours of flying experience holding Cat/IR AMG and is an alumnus of Defence Services Staff College with a DS grading. He has held several important appointments that include Chief Flying Instructor at Basic Flying Training School, instructor at Flying Instructors’ School and Commanding Officer of South Western Air Command Communication Flight. He was the first Commanding Officer of 78 Sqn, the first Flight Refueller Aircraft Sqn of the Indian Air Force. He was appointed AOC of the prestigious Air Force Station Agra and during his tenure, he ensured timely induction of the AWACs platform and the station won the Pride of CAC award. In addition, he was instrumental in getting the C 17 aircraft inducted into the AF.
He was instrumental in setting up a Special Operations unit of the Transport fleet. He served as Air-II EAC wherein multifaceted utilisation of unused airfields, forward area of operations from ALGs and major issues pertaining to Mi17 V5 inductions in EAC were proactively handled by him for vital dividends. He has been commended by the Air Officer Commanding-in-Chief, Eastern Air Command in January 1985 and by the Chief of the Air Staff in January 1997. He was also conferred the Presidential award of Vayu Sena Medal in January 2005 for devotion to duty and dedication of a very high order. At present, he is posted as Assistant Chief of Integrated Defence Staff (ICT), HQ IDS, Ministry of Defence with effect from 2nd March 2015.
Air Vice Marshal Shouvik Roy addressed the august gathering in the month of October and showed a video footage of daring Suryakirans and 29 aircrafts taking off simultaneously during his tenure as Air Officer Commanding, Agra. Air Vice Marshal Shouvik Roy encouraged and motivated the Scindians to join the forces and always be alert and active. His motto was that the boys must have a purpose of life which is basically to lead a life with purpose. At the end he along with his wife and son sang a melodious song.
After receiving a memento from Air Vice Marshal Shouvik Roy, Principal, Dr Madhav Deo Saraswat said that AVM Roy is a rare combination of wisdom and simplicity. Air Vice Marshal Shouvik Roy announced that a plaque would be given by his family every year to honour a promising Scindian who can prove his distinction from existence to excellence.
The highlight of the evening was the presentation of SOBA Award to Dr Vikram Mathur and SOBA Cup to Mumbai Chapter. Geet Sagar, winner of X Factor, India was the star attraction for the evening as he entertained the gathering with his foot tapping numbers. It was followed by Principal’s Dinner. In all a joyous Founders Day Celebration was experienced at The Scindia School by the august gathering. The Scindia School culminated its three days long celebration of the Founder's Day on 22nd October 2016 with the hope to carry forward the legacy with aplomb.
click here to see the complete evening program.
click here to see picture gallery of evening program.