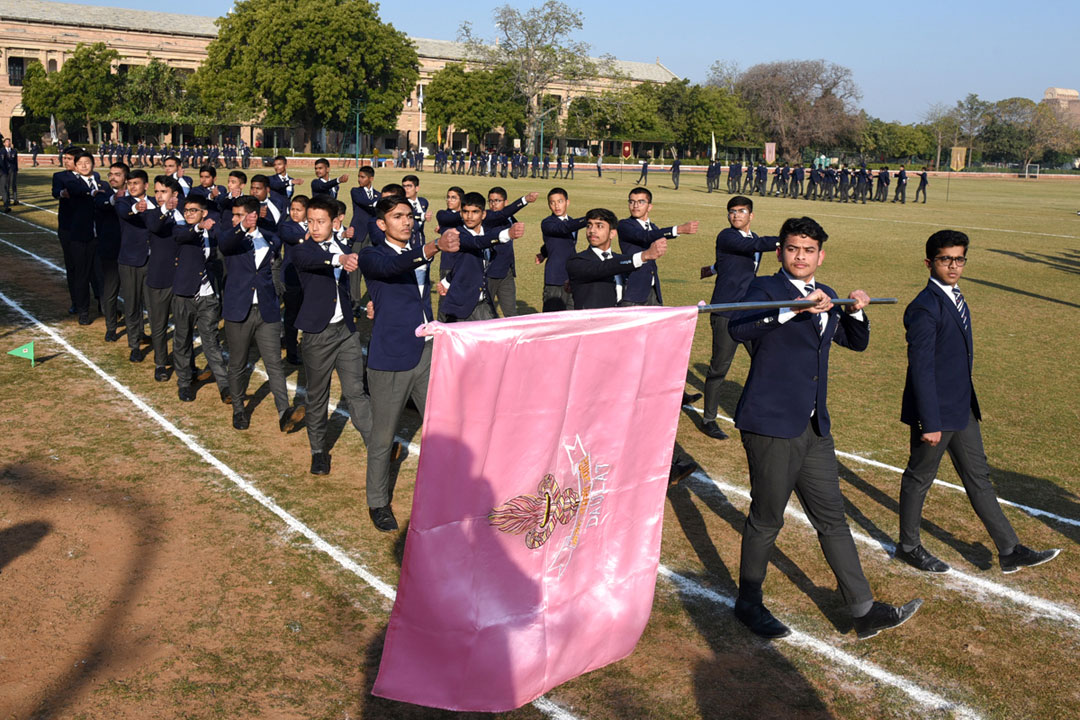 The Scindia School celebrated the 71st Republic Day of the Nation on Sunday, the 26th of January 2020 with gusto. The celebrations began with the arrival of the Chief Guest Mr. Vishnu Agarwal, an eminent Old Boy, who unfurled the tricolour and inspected the smartly turned out contingent of the parade. The squad was led by the Old Boys of the batch of 1969 – 70, who were on the Fort to celebrate their Golden Jubilee Reunion. The Principal, Dr Madhav Deo Saraswat in his address mentioned that the momentous day is not just a day of celebrations but also a reminder of our rights and responsibilities and must be used to take stalk of our current situation. He further mentioned that India has emerged as a progressive and a strong nation, however we cannot afford to become complacent and must make sincere efforts to take the country to higher heights. The Chief Guest, Mr. Vishnu Agarwal [Ex-Ranoji 1961] was delighted to be a part of the grand celebrations and complimented the boys for their level of energy. Mr. Agarwal mentioned that this century belongs to India, as the economy is on the way of becoming a global leader. Through a personal anecdote, he further elaborated how Scindians are apart from the rest of their counterparts and complimented the value based education that the institution has been providing ever since its inception. Mr. Agarwal reminded the boys of the role they would be playing in furthering the development of the nation by providing it good leadership.
The formal ceremonies of the day were followed by the community gathering at Astachal; the spiritual centre of the School, where floral tributes were paid to Mahatma Gandhi. A solemn prayer ceremony was organised to revisit the ideology of the sung and unsung heroes of our great nation. The Senior School Prefect, Aditya Parashar extended a warm welcome to the Chief Guest and the batch of 69 - 70. The feeling of patriotism was at its highest when Aditi Joshi recited a poem titled “Mein Bharat Ka Jawan Hoon” Thereafter, the traditional handing over of the Golden Jubilee baton to the batch of 70 - 71 took place, as they would be celebrating their Golden Jubilee Reunion next year. A representative of the batch of 70 - 71 expressed his feelings eloquently on behalf of his batch, upon receiving the baton. Expressing their gratitude towards their alma matar, a group of eminent Old Boys handed over a token to the Principal, the funds donated would be utilised for scholarships and SOBA House. The simple yet meaningful ceremony ended with the observance of silence. After the formal proceedings of the day the members of staff, Old Boys and the Prefectorial Body enjoyed an informal interaction over a three course breakfast at the Principal’s residence