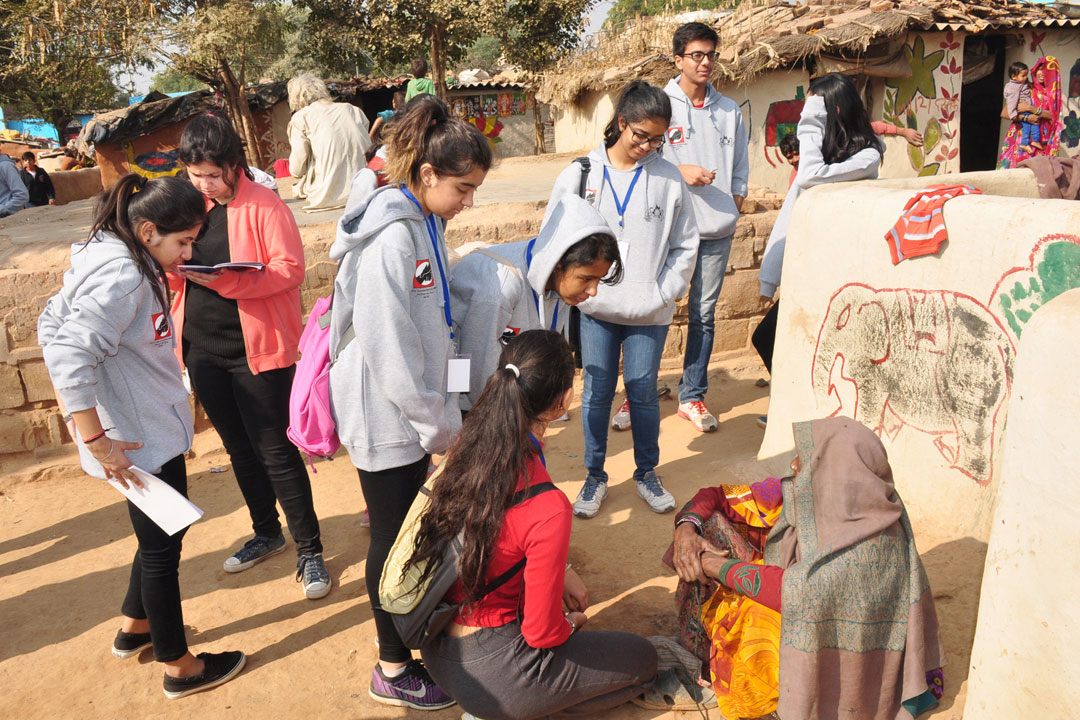 Project Introduction:
This is the 9th consecutive year of this project in Nathon-Ka-Pura, a 60 year old village, which has about 100 families or a population of about 1500 people who now live in abject poverty as they lost their main occupation of snake charming due to a government ban. The Scindia School decided to support these villagers in every possible way. We promote infrastructural development, hygiene and sanitation and economic empowerment. We also promote positive social change through empowering village women by teaching different art forms and skills through which they can get a permanent source of income.
What is the Project?
There will be two simultaneous projects that will go on during this project. One is to construct a 500 meter long concrete water channel so as to direct the soapy water spilled as an outcome of washing clothes and utensils which keeps a large part of the village perpetually bedraggled. Once this channel is constructed, the water will be directed to the extremities of the village. Second is to refurbish the existing toilets in the primary school and continuing with the next phase of development of income generating training-cum-production unit for women.
Project Update: Day 1
Arrival on the 18th: Six schools namely, Singapore International school – Mumbai, Dhirubhai Ambani International School - Mumbai, Scindia Kanya Vidyalaya- Gwalior, British School -New Delhi, Emerald Heights –Indore, Millenium School –Dubai arrived on the Fort on the 18th. An ice breaking session was organized for them at 5 PM in the evening. All the delegates were asked to select a partner of their choice with the condition that the partner must be from another school. Then all the delegates were asked to sit in a circle and play ‘pass and pass’. In this game delegates had to pass on a pillow while the music played. When the music stopped, whoever had the pillow had to come in the center and introduce his / her partner. Although simple, it did break the ice and the delegates got to know each other. Several other games were conducted and by the end of the said session the delegates surely got to know each other better.
Day 2: (19/12/2016)
On reaching Nathon-ka-Pura, the delegates were divided into five groups. The 1st group which had the largest number of delegates was assigned the task of constructing the 500 ft. water drainage channel. The 2nd group was asked to help in the renovation of school toilets. The 3rd group was held responsible for the women empowerment activities in which they had to assist and teach the women of the village some economically productive skills so that they can earn and run their homes smoothly. The 4th and 5th group explored the village, interacted with the villagers and conducted a survey on Family Planning methods used by them.
Click here to see photographs.