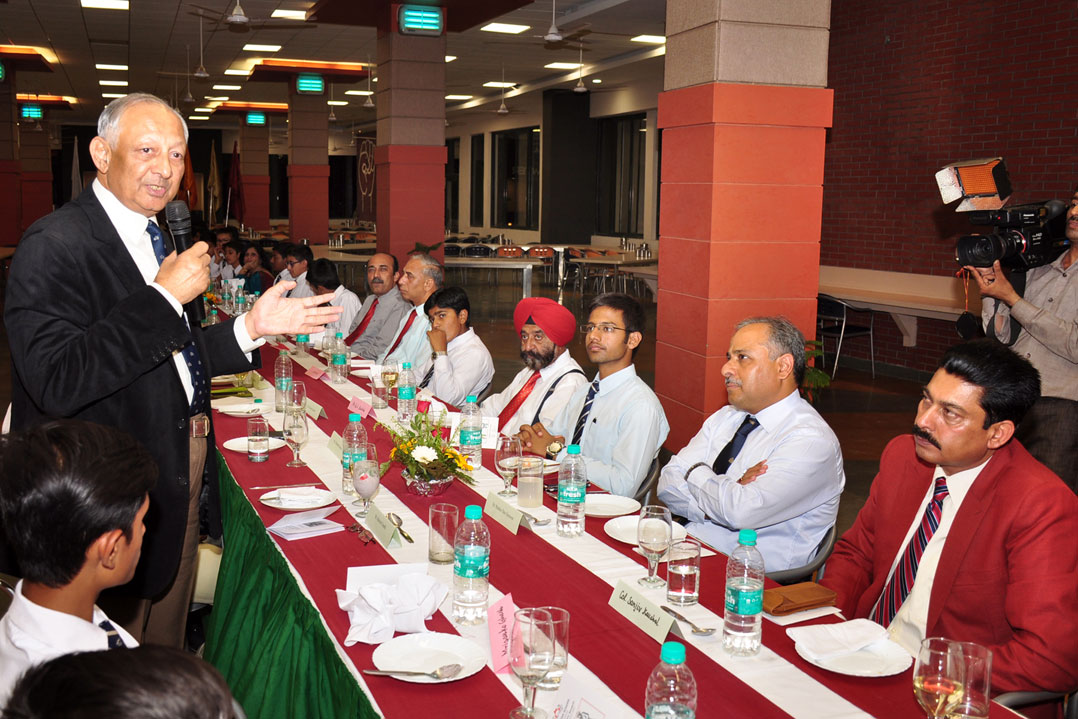 The XVth Scholars' Banquet for the academic year 2014-15 was organized on 19th April 2016. The Chief Guest was Mr. Mahesh Gandhi (Ex Ranoji- 1959), Member- Scindia Education Society. An alumnus of the Scindia School, Mr. Gandhi holds a Bachelor’s degree in Science. He is also the Chairman of the Admissions Committee and has served on Committees for Infrastructure, Finance and Investment and Human Resource. He is the Vice-President of Gurukul Group of Educational Institutions (Mumbai). As a member of the Board of Governors, he mentors and guides the school to achieve its vision and mission.
At the beginning the Band Display welcomed the Chief Guest, Mr. Mahesh Gandhi.The first toast was raised by the Principal, Dr. Madhav Deo Saraswat for the Chief Guest. The second toast was raised by Senior School Prefect, Mriganka Ghosh for Happiness of the school.
The winner of Gurudwara Trophy for being the best house in academics went to Madhav House for the year 2014-15. The Sam Pitroda Award for excellence in science project, Umang Mathur Memorial Award (Non Class XII Academics) and Governor's Medal for (Scoring Highest Percentage in Class XII) were also mentioned in the banquet.
The criteria for Scholars’ Banquet was as follows:
Classes VI to VIII: Students who scored a perfect 5 CGPA in all the subjects throughout the year.
Classes IX and X: Students who have scored CGPA of 9.6 and above in overall performance.
Class XI: Students who have scored 90% and above in overall aggregate.
After the formal ceremony the chief guest motivated the boys to excel in academics while aiming for an all-round development of their personality. It was an honour for the scholars to interact with the Chief Guest. The students were distinctly motivated to maintain and improve upon their achievements in academics and to bring glory to the school. The event ended on a very positive note.