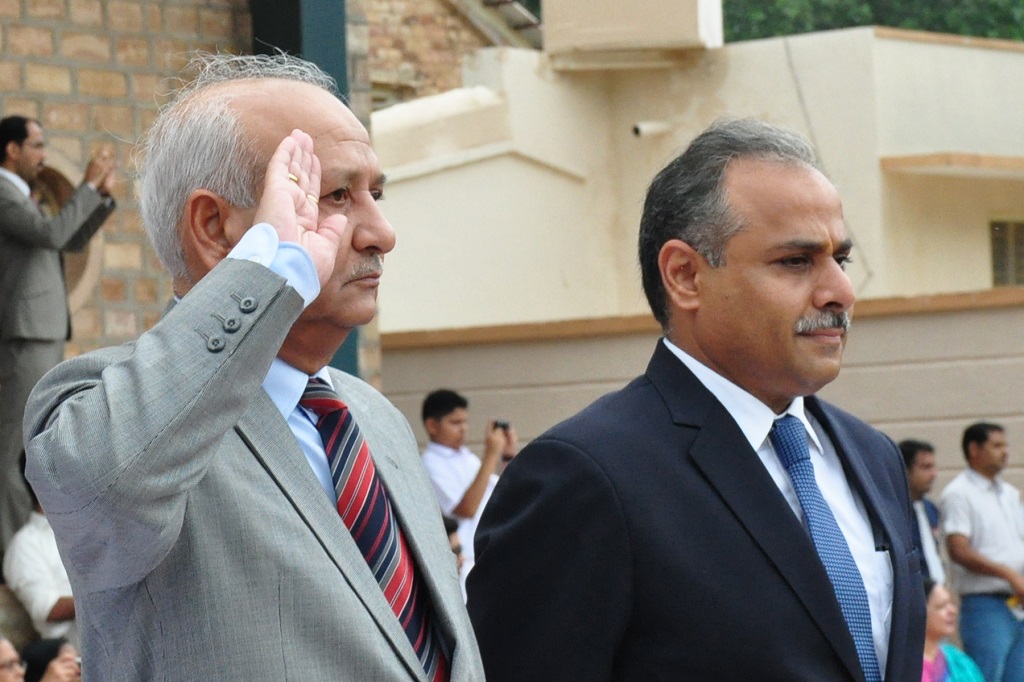 The country’s 70 th Independence Day was celebrated at The Scindia School today; 15 th August 2016. It was a moment of pride and glory as the Chief Guest; Justice Sanjay Misra arrived in a car flanked by the Scindian boys on horses.
The Chief Guest was received by the Principal; Dr Madhav Deo Saraswat and then introduced to the entire staff. The event began with the national anthem. The Chief Guest; Justice Sanjay Misra is an alumni of the school. He was in school from 1964-1969, Ex Chaitanya House. Then the Chief Guest hoisted the flag. Principal; Dr Madhav Deo Saraswat escorted Justice Sanjay Misra as he inspected the houses while the school band played some memorable tunes. While the Chief Guest took the Guard of Honour marching tunes were played by the band. The band played the Trumbone King, Colonel Bogey, Ma Tujhe Salam, Chariots Of Fire, Final Countdown etc. It was a treat to watch the marching troop march in perfect order. They were full of enthusiasm and felt proud to march smartly.
In his welcome address Principal; Dr Madhav Deo Saraswat felt elated and welcomed the Chief Guest, Justice Misra with pride. He said that it is a matter of pride to be associated with the most worthy institute for education, a legacy which is passed down from generations. Dr Saraswat considered the Chief Guest as one of the thousands of Scindians who has set a precedent in life.
The Principal also welcomed Mr Ram Chandra Mukund Muchrikar, who is103 years old. As the chief accountant Mr Ram worked diligently for 38 years. Dr Saraswat felt that no day could be more suitable as today to give a befitting tribute to two noteworthy Scindians who graced the occasion. Dr Saraswat reiterated the fact that independence means freedom from ignorance and pettiness. He urged the boys to imbibe the attributes of character, integrity and wisdom in their lives.
The Chief Guest; Justice Sanjay Misra motivated the boys and said that independence is not just political independence but it comes with responsibility. The rights and corresponding duties which need to be performed are inseparable. Each citizen should be disciplined and it will eliminate every obstacle. Justice Misra reminded the boys that they are privileged to be a part of a premier institution where they gain knowledge and imbibe human qualities. The school offers opportunities to nurture individuality, confidence and compassion. Justice Misra gave his best wishes to all the students for a successful tenure. He encouraged the Scindians to have the courage to make a difference by their sincerity and integrity.
Then all house masters escorted the Chief Guest and the dignitaries to Oval Field for a tree plantation initiative.
Subsequently everyone went for Asthachal and the dignitaries offered petals at Gandhi ji’s statue and observed a minute’s silence in honour of the great freedom fighters. The junior boys sang Mera Vatan. The Principal, Dr Saraswat felt it was a great moment as the entire family sat together in introspection. On behalf of the Scindian fraternity he presented a bouquet and a shawl to Mr Ram. Dr Saraswat motivated the boys to rise above petty things and remember that the true aim of life should be living for others.