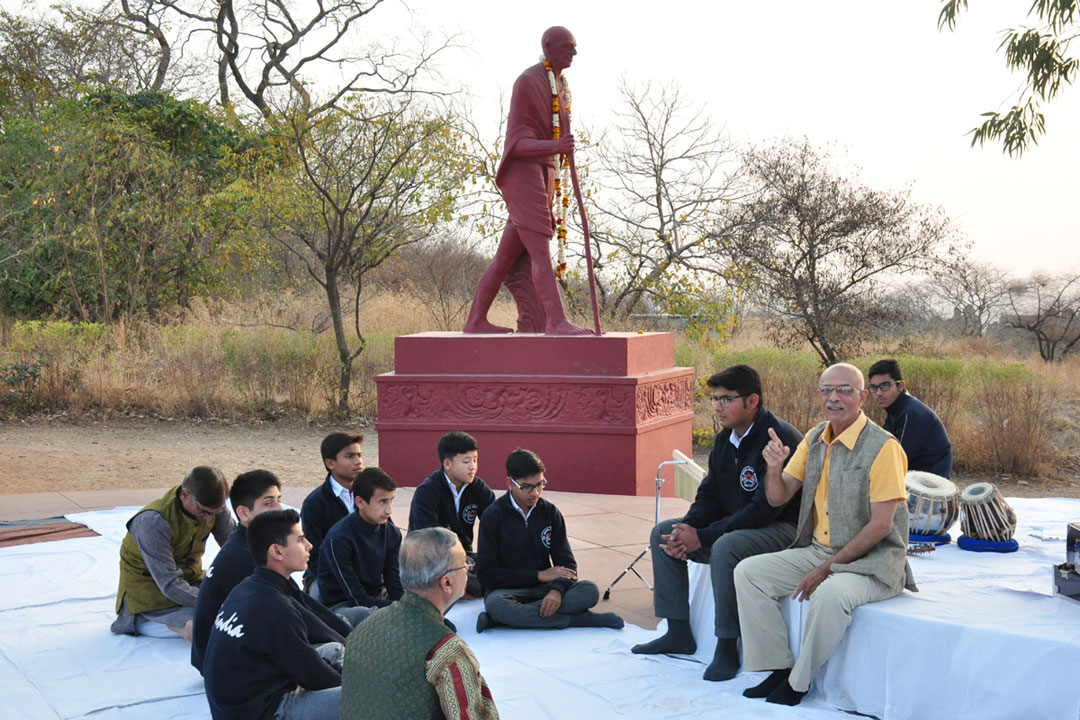 Shri G. Gautama, Director – Secretary of the Palar Center for Learning (PCFL – KFI) comprising Pathashaala School, Outreach programs and a Krishnamurthi Study Center, visited ‘Astachal’ on the 23rd of February, 2018. Upon his arrival, Prasoon Naithani welcomed him on behalf of the Scindia fraternity to the Spiritual Center of the School.
The prayer meeting started with the chanting of the Sanskrit shloka ‘Twameva mata cha pita twameva’, followed by a short story titled ‘Pyari bitiya rani’. It was eloquently presented by Faizan Kareem, who drew the attention of the audience to the joy of parenting a girl child. Next was an inspirational piece read by Shashank Kilhore, which focussed on being optimistic and accepting the challenges of life to emerge as a winner in the true sense of the word. The proceedings ended with a mellifluous bhajan ‘Sumiran kar le mere mana’. After which the Senior School Prefect, Snehil Tripathi requested Shri G. Gautama to address the gathering.
Shri Gautama thanked the Principal, Dr. Madhav Deo Saraswat for inviting him to be a part of ‘Astachal’ and complimented the students for their efforts. He expressed his admiration towards the fact that the School is not only quenching the thirst of knowledge but is also providing food for the soul. With the help of some pertinent and real time examples he explained how the World today is finding it difficult to share resources, which in turn is increasing the unhappiness quotient in humans. Further in his conversation he mentioned that life in the 21st century is driven by accomplishments and people are forgetting the essence of leading a happy life. He suggested that one must also focus on the intangibles of life and work on nurturing relations, as everybody around us has some thing or the other to offer.
After ‘Astachal’ the faculty got the opportunity to indulge in an informal interaction with Shri Gautama, where the key point of discussion was the role of a teacher and how the association between the teacher and the taught could be made more meaningful. Though the session was short but it left an indelible impact on the minds of the members of the Scindia family.