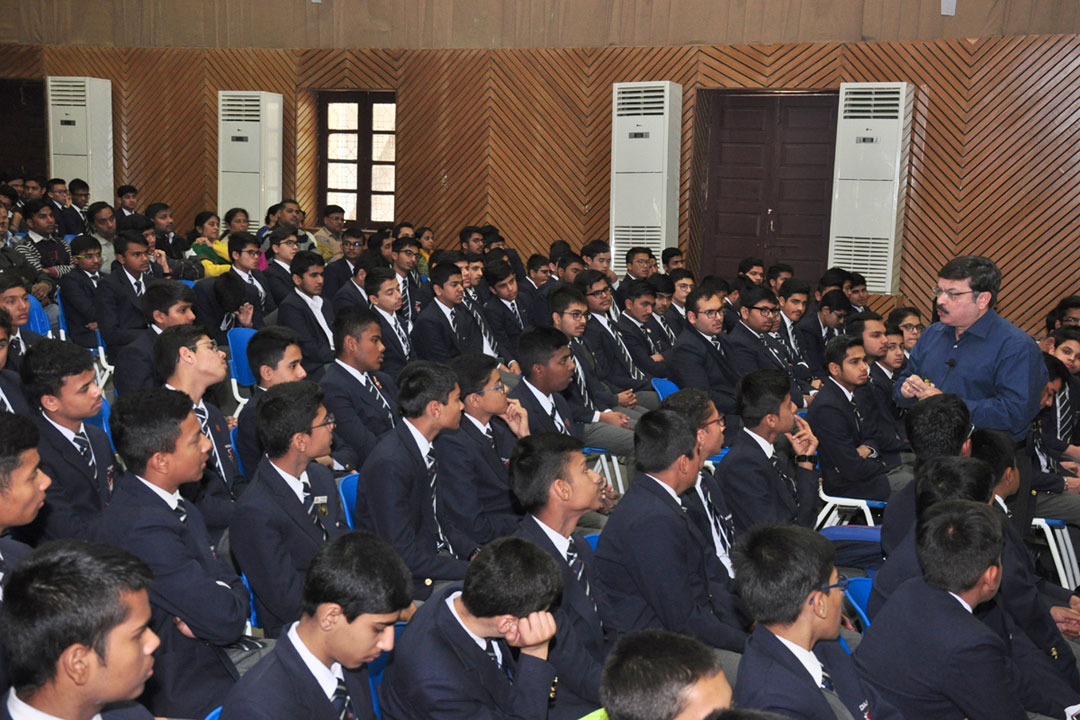 In order to create awareness amongst the pupils of the 21st century, about the hazards of the virtual world, a workshop was organized at The Scindia School on the 8th of February, 2018 on Cyber Crime under the aegis of ‘Black Ribbon Initiatives’.
Mr. Varun Kapoor, Additional Director General of Police, Narcotics had kindly consented to conduct the session. His illustrious career has spanned over a period of 27 years. He joined the Indian Police Service in the year 1991, Mr. Kapoor has to his credit the World Record for conducting the maximum number of Cyber Security Awareness Workshops. His erudite knowledge was well received by the attentive audience, as various aspects of the subject unfolded. The entire workshop was conducted in an interactive manner, as a lot of pertinent questions were raised, which were answered in great detail by Mr. Kapoor. The focus of the session was to create awareness about the usage of networking devices, which have become a part and parcel of everyone’s life. An individual who is unaware of the uses of cyber world is vulnerable to the risks it poses. The entire session was meticulously designed and executed, it covered a wide range of issues from morphing to online predators.
Mr. Kapoor discussed the reasons behind an increased rate of cyber-crime and also shared measures that could be easily taken by the users to effectively avoid being victims of it. He explained how one must be mindful while using networking devices, as they create digital footprints. Cyber bullying was another matter which was discussed at great length, so as to avoid youngsters falling in its pangs. The student were also made aware of dark net and surface net during the course of the workshop. The data and the real time case studies discussed, helped the audience to understand the message with absolute clarity.
Shashikiran Gonugunta and Krishnam Purwar were awarded Certificate of Appreciation by Mr. Varun Kapoor for their valuable contribution to the talk. Principal, Dr. Madhav Deo Saraswat felicitated Mr. Kapoor with a token of appreciation for his tireless efforts towards the cause.