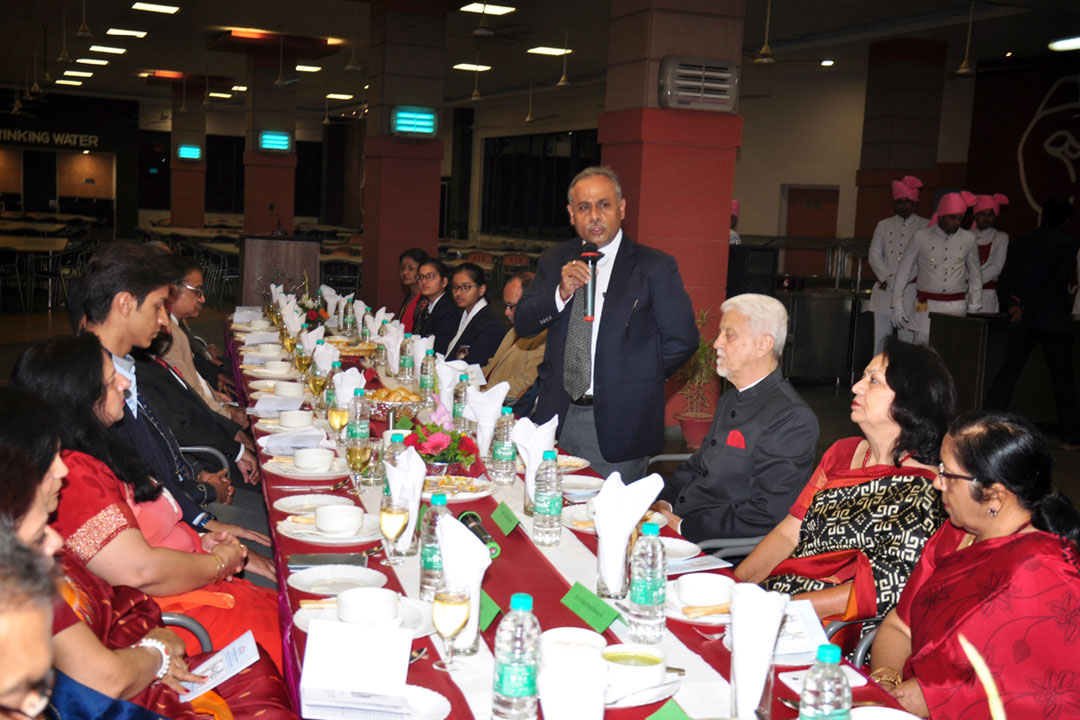 In order to felicitate the outstanding scholars of the session 2016 – 17 the XVII Scholars’ Banquet was hosted at The Scindia School on the 27th of February, 2018. Mr. Bharat Vir Wanchoo (Ex Jeevaji 1968), graced the occasion as the Chief Guest. He is a retired officer of the Indian Police Service of the 1976 batch. The much decorated police officer is recipient of the Presidents’ Police Medal, 2001. Mr. Wanchoo provided exceptional thought leadership to Goa, as its Governor from May 4th 2012 – June 4th 2014 and was referred to as the best Governor the state ever had. He was accompanied by his wife Mrs. Nandini Wanchoo.
On arrival Mrs and Mr. Wanchoo received a grand welcome by the much sought-after Brass Band of The Scindia School. The Principal, Dr. Madhav Deo Saraswat in his welcome speech expressed that it was his proud privilege to welcome an alumni of Mr. Wanchoo stature. He mentioned that the Chief Guest was an epitome of the ‘Scindian’ values and suggested the gathering to emulate people like him. The Principal then raised a toast in honour of the Chief Guest. This was followed by the Senior School Prefect, Snehil Tripathi raising a toast for the proud members of the banquet.
This was followed by a delectable four course meal after which in his address the Chief Guest, Mr. Wanchoo enunciated his pleasure on being back to his alma-mater. In his thought provoking discourse he reminded the students of the critical stage they are at and pressed on the significance of values like sincerity, determination, perseverance in achieving long term success. He also expressed his admiration for the guru-shishya parampara, which sets The Scindia School apart from any other institution of the country.
Towards the end of the grand evening the Principal, Dr. Madhav Deo Saraswat felicitated the Chief Guest with a silver salver, as a token of appreciation. His presence was especially encouraging for the students not only because of the various hats he has donned in his illustrious career but also for being a true ‘Scindian’.