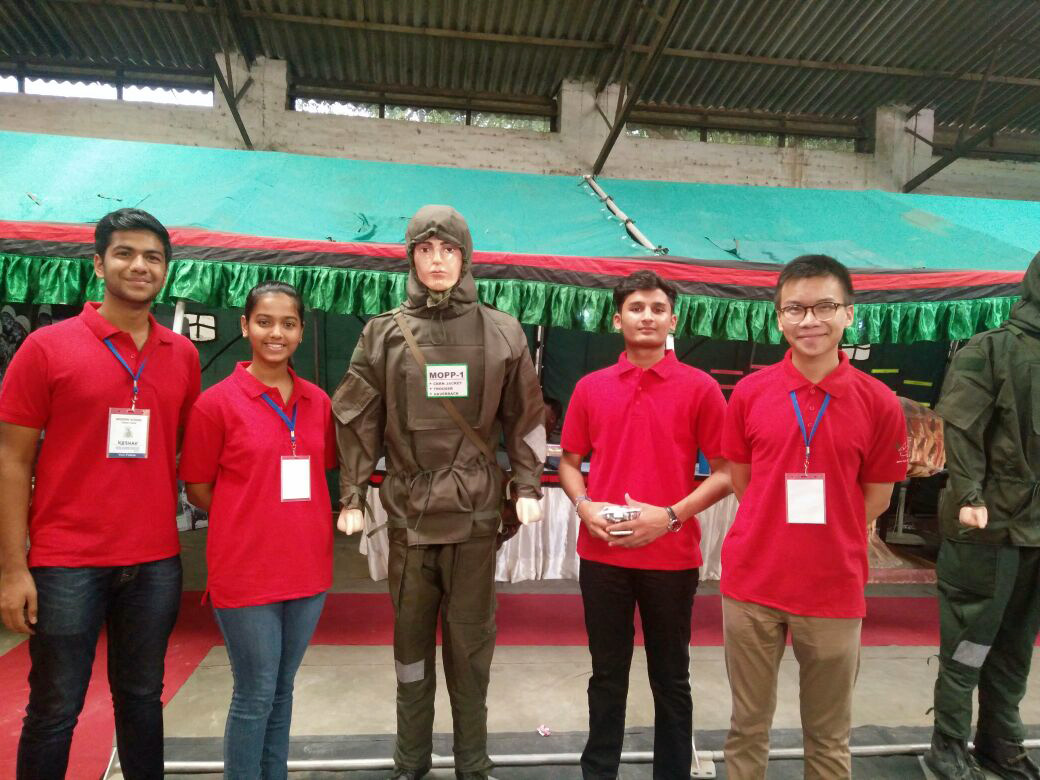 Four students( Keshav Sarawgi, Yohen Thounajaom, Madhav Agarwal and Aadya Mishra) along with Mrs Puja Pant attended the 5th edition of the Young Leaders Conclave hosted by Modern School, Vasant Vihar from 8th August to 12th August. The theme of the conclave was 'The Cost of War' and the facilitators for the same were Mr. Parnab Mukherjee an Independent Media Analyst, Knowledge Resource Curator and Performance Consultant and Ms. Agrima Bhasin who is a well-known Public Policy Analyst and Leadership Trainer.
In the course of the five days students got to hear stimulating talks by a couple of eminent speakers. British High Commissioner to India Sir Dominic Asquith apprised them of the social, political, financial and psychological impact of war. The delegates asked insightful questions like if there is something like a successful war, are military interventions justifiable, the reasons for the inability of UN to prevent war and many more. Ms Amina Sherwani who is an activist spoke about the importance of dialogue for conflict resolution in insurgency affected areas. She spoke about Islam, the misconceptions around it and the issues related to the hijab and triple talaq. Some aspects of her talk proved to be rather inflammatory as the delegates felt her approach towards the Kashmiri insurgency and the views about the army were rather anti Indian. Ms Asiya Zahoor a poetess from Kashmir read excerpts from poems of different poets. She focussed on the very pertinent issue of being open about accepting alternate truths and bridging barriers through writing or other art forms. The most enriching and engaging talk was by Assistant Chief of Naval Staff Rear Admiral Sanjay Jasjit Singh. He defined war, its consequences which are human, political, economic, societal and ideological, post war challenges and also how to prevent war. He spoke at length about maritime security and left everyone with a powerful thought 'The strong do what they can. The weak suffer what they must'
Through videos and activities students were made aware of the horrors of war and its human cost. They composed poems, speeches and dialogues to express their angst. They were explained the distinction between Gandhian philosophy behind fasting which used to be purposeful and the present attitudes towards it which tend to be directionless. As a part of one of the group activities the students had to establish a Ministry of Peace for a fictitious country. They established different departments under the Ministry namely department of Equitable Distribution, of Social Attitudes, of Human Capital, of Free Flow of Information and of Well Functioning Government. On the penultimate day the students were taken to the army cantonment where they saw a display of weaponry and some of the training drills the soldiers go through. The aim was to give them a first hand understanding of the lives led by the men in uniform. The delegates also dined in the army mess. The evening winded up with an enjoyable dance party and formal dinner.
The final day was a deviation from the theme. It comprised a round of reflections on relationships and the need to maintain one's identity. The delegates also witnessed the Independence Day celebrations at school and received their certificates.
All through the five days the students stayed with host families and returned with high words of praise for the hospitality extended by the families and the host school. The host families also appreciated our students for their impeccable behaviour and courtesies. The Scindian delegation was delighted to meet Mr Prashant Chaturvedi, former teacher of the Scindia School, who was representing Welham Boys' School.
The conclave did clear the air on various situations of conflict that the students were aware of but it also left them with many more questions to mull on. It is hoped that these leaders of tomorrow will help in the creation of a conflict free world.