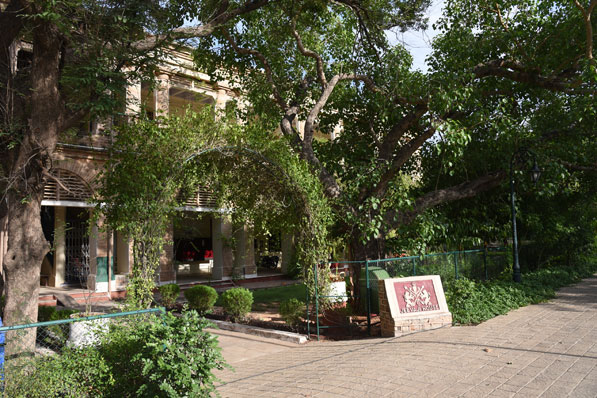 His Highness Jeevajirao Scindia lost his father when he was nine years old. He recognized the importance of representative institutions. He followed his father’s legacy and undertook a number of measures to relieve the financial burdens of the farmers, established educational institutions, libraries, and hospitals for women and children. Jeevajirao ruled Gwalior until India's independence in 1947 and was one of the first rulers to accede to the Indian Union and signed a covenant with other rulers by which Gwalior was merged with princely states to become the new Indian state of Madhya Bharat within the union of India. He contributed Rs. 50 crores to the Government of India exchequer. 'George' Jeevajirao served as the State's Rajpramukh, or appointed Governor till 31 October 1956, when Madhya Bharat was merged into Madhya Pradesh. He used to visit the School and dine with the students once a week. He gave the School the vision statement: ‘The young men who go out of The Scindia School will carry in life and in their conduct the bold imprint of this institution, the stamp of self-discipline, of character, of chivalry, of dignity, and of good behavioural qualities on which higher citizenship is based.’ Jeevajirao abolished the system of bonded or unpaid labour. He built the Tekanpur Kothis, where the BSF Head Quarter is now located. He continued to serve until his untimely death in 1961, when the mantle passed to his 16 year old son Madhavrao Scindia II. The motto of the House is "Guna Pooja Sthana"

Mr. Srijit Pillai, a man of his words is an absolute example of a perfect gentlemen. He is an enthusiast and has a great interest in adventurous and outdoor activities. He always keeps a crave for perfection in academics from students as he himself is an outstanding mathematics teacher who teaches not only the right approach to solve questions but also to apply them into the real world. He wishes to imbibe traditional and cultural values in the boys of Jeevaji house. What adds to his charming personality is his impeccable sense of humour.