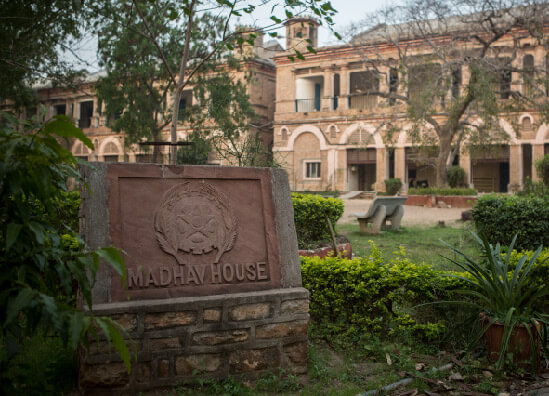 Who was Madhav ? Also known as Madhav Maharaja, His Highness Maharaja Madhavrao Scindia I was only ten when his father died. The Council of Regency ran the state till 1894 after which he assumed charge. Madhavrao Scindia I took steps which display a progressive and democratic outlook. He separated the functions of Judiciary and Executive, and established Panchayat Boards. He surprised all by separating State money and his own, fixing his privy purse at a mere two percent of the State revenue. It was his initiative to connect Sheopur, Bhind and Guna by Gwalior Railway. Further, he deposited Rs 25 lakh every year in the Gangajali Fund, which was reserved for development projects such as education, famine relief and irrigation. He built the Tighra Dam. It is believed that he would disguise himself as a commoner and wander the streets of Gwalior unrecognized to check on the performance of the administration. It is His Highness Maharaja Madhavrao Scindia I who established the Scindia School in 1897 for the sons of the chieftains of Gwalior state to give them a progressive education. Madhavrao Scindia I was a diabetic and finally died in a hospital in Paris. He had two wives, and his second wife Gajraraje bore him a son named Jiwajirao – who succeeded him. The statue of His Highness Maharaj Madhavrao Scindia I mounted on a horse is placed in Jayendraganj. The Motto of the House is “Be bold in what you stand for” About the House Master Mr Manjeet Bainipal teaches Geography and loves to be close to nature. He has a knack for trekking and loves to venture into adventure sports. He has an ardent affection towards games such as volleyball. In his leisure time, he relishes playing it. He is a staunch observer and is curious about new things in life.