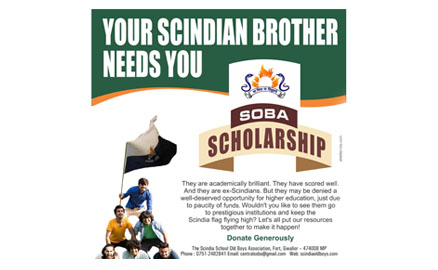 Dear Alumnus,
SOBA has amongst its aims & objectives, establishment of scholarships for deserving students. This year, the Principal has proposed the name of Vivek Singh Shahariya (2015 Mahadji) as a recipient of this Scholarship, and SOBA has accepted to fund upto Rs. 1.50 lacs p.a. to him for the next 3 years. Vivek, hailing from a small village called Dabka near Gwalior, was a Government scholar, having studied in our School from 2008 to 2015. He is an outstanding athlete & cricketer, having represented the School in IPSC & SGFI. He was awarded the Sports Blazer for 2013-14. He has scored 76% in Class XII CBSE & is admitted to B.A.(Hons.) in Political Science with Shivaji College of Delhi University. He aspires to do UPSC thereafter.
SOBA is proud to award the SOBA Scholarship to Vivek Singh Shahariya.
We welcome contributions from all Scindians for this noble cause. We shall accept contributions of Rs. 1000/- and above. Any Scindian who wishes to contribute may deposit the amount in SOBA's Bank Account through NEFT/Cheque.
Account Name: The Scindia School Old Boys Association
Bank Name: Bank of Baroda, Sansad Marg Branch, New Delhi
Account No. : 05860100004091
IFSC Code: BARB0PARLIA
MICR Code: 110012028
Branch Code: PARLIA
This scholarship was started in the year 2013 when we had two outstanding students of 2012 & 2013 batches, who had desired to pursue their studies further but faced financial difficulties. The Principal had identified these two deserving students and approached SOBA for support. SOBA is presently funding a combined amount of approx. Rs. 3.00 lacs p.a. for the scholarship of these two students for the last 3 years. The scholarship of these two students is still continuing.
1. Mohit Mandeliya : Class of 2012 : Admitted to study BSc. Biotechnology from ITM College, Gwalior. He was a Government Scholar , and a School Prefect at Shivaji House.
2. Ayushi Awasthi : Class of 2013 : Outstanding result in Class XII Board examination. Significant contribution in the field of Social Work and Audio-visual presentations on the school. A meritorious student and a scholarship recipient at the Scindia School. Admitted to the Gargi College at Delhi University.
All other information about these students will be available from the Principal at the Scindia School on request.
Together, let's make things happen !!!
Sincerely,
Gopal Bhargava
President, SOBA
centralsoba@gmail.com